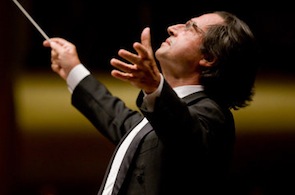 Riccardo Muti, who became the Chicago Symphony Orchestra’s 10th music director in September 2010, is one of the world’s most distinguished opera and symphony conductors. But at this point in his career, the 70-year-old Italian maestro is interested in more than leading one of the world’s great orchestras. He is also passionately committed to building bridges with music, to reaching listeners who might never set foot inside a concert hall or opera house. In 1997 he created a Paths of Friendship project that has included concerts, often with multiethnic corps of young performers, in locales ranging from Sarajevo to Kenya.

During a recent interview in his dressing room backstage at Symphony Center, the CSO’s home in downtown Chicago, Muti talked about his new post in Chicago, his desire to push classical music beyond its accustomed borders, and the music of the CSO’s innovative young composers in residence, Mason Bates and Anna Clyne.

Now that you’re settling into Chicago, how does the city strike you?

I had not been to Chicago for many years, so I found a completely different city from what I remembered. [Muti made his CSO debut in 1973. His next performances with the orchestra were more than 30 years later, in September 2007.] It was a much more beautiful city — with new buildings — and full of light. And for me, having been born on the Mediterranean Sea and growing up on the Adriatic Sea, water is very, very essential. So to have this [Lake Michigan], which can be considered a sea, it is fundamental.

Also, people in the Midwest are very warm. For a Neapolitan, for all our defects, in the south of Italy, we are warm people. It makes me feel really comfortable. Also all the universities. I have the presence of Philip Gossett [general editor of an ongoing project between Italy’s venerable Ricordi publishing house and the University of Chicago to publish new critical editions of all of Verdi’s operas]. I am grateful to this city because of all the new editions of the Verdi operas. Because of Verdi, there are elements that make this city even more familiar, more close to me.

As for the Chicago Symphony Orchestra, the instrument is wonderful and has a long history of great music directors. Of course, every conductor gives his own stamp. But I didn’t come here with the idea that I want to change [the CSO]. I’m here not only to make music with this wonderful orchestra, but I also want to help the city, as much as I can, to come close to the music. Because I believe culture is the only thing that can save this world.

Because of Verdi, there are elements that make Chicago even more familiar, more close to me.

Has this idea [of making culture broadly available] always been important to you?

Always. At the beginning, if you don’t make a career, you cannot speak; nobody will care about you. But when you become generally respected and are considered an important artist, then you can devote yourself to more noble [endeavors] than to make music only for applause. All of the concerts I do for friendship, traveling to other cities, have given me the strong idea that people can communicate through music and love each other.

I know the only possibility we have for the future is culture.

Two summers ago we decided to do a concert in Italy, in Trieste, a fantastic city that is on the border with Slovenia and Croatia. The three nations still have problems, so we invited young choral singers and musicians from Slovenia and Croatia to perform together with the [Cherubini Youth Orchestra, which Muti founded in 2004].There is a fantastic picture of the big square in Trieste with more than 10,000 people with the three presidents sitting one near to the other for the first time. And the boys and girls became friends. After the concert, they went to the trattoria, for pizza, and maybe something else! This was thanks to music. It is the power of music.

You have worked with people in prisons. How did that come about?

My first experience was in Ravenna, in Italy, many years ago. I received a letter from a prisoner asking, “Maestro Muti, why don’t you come one day and speak to us about music?” He told me that the other inmates made fun of him. They said, “He will never answer you.” I wrote back, and I said, “I will.”

The director of the prison was a woman, and she was helping the people there to become better through culture. So I went there, and when I arrived it was very strange. It was like the doors of [Dante’s] Inferno — the doors to the prison open, and then they close behind you.

The women and the men were dressed very elegant, dressed as if for a gala. There was a piano and I played for two hours. I selected music, movements from pieces, that was full of pathos — Schubert, Chopin, Beethoven, Schumann: so touching. And short. I could play and explain, play and explain. They were so taken and they wrote fantastic letters. They listened with such attention; I would like sometimes to hear that in the concert hall. Never a cough, not one.

The CSO has just extended for two years the contracts of Mason Bates and Anna Clyne, whom you appointed as composers in residence in 2010. What attracted you to their music?

I chose these two on the basis of their scores. I didn’t even look at the names. There was the fact that they were, first, capable of writing well for an orchestra. But the most important thing was that their music was not just full of difficulties or strange tempos or noises. They expressed feelings, an atmosphere full of expression. For me, it was very important that I chose not because somebody recommended this name or that name, no editors or managers. I didn’t know their faces, just through their music.

Why do you consider it important to reach young audiences, to work with young musicians?

I come from a country [where] I grew up with teachers who spoke mainly about philosophy, the ethical approach to work, the culture. I didn’t know the existence of television until I was 17 years old, so I come from a completely different world. I have children and I have grandchildren; I care about the future. And I know the only possibility we have for the future is culture.