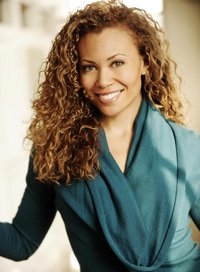 Changing character and voice is nothing new for lyric soprano Alyson Cambridge. Equally comfortable in her high and low ranges, she recently celebrated the release of her recording of William Bolcom and Sandra Cecelia Seaton’s The Diary of Sally Hemmings, which was written for mezzo Florence Quivar. Bolcom’s music is a far cry from San Francisco Symphony’s July 8 presentation of the Gershwins’ Porgy and Bess Suite, where she will alter her voice and temperament to sing favorite arias by three different characters.

Cambridge was all of 23 when, while a first-year student at the Curtis Institute, she won the Metropolitan Opera National Council Auditions. Nine months later, she debuted at the Met as Frasquita in Carmen under James Levine. Most recently, she appeared in Met telecasts of Thaïs and La rondine. Forthcoming are returns to the Met and Washington National Opera companies, plus debuts with Savonlinna Opera, Lyric Opera of Chicago as Giulietta in Tales of Hoffman, Deutsche Oper Berlin as Donna Elvira in Don Giovanni, and Warsaw Opera as Violetta in La traviata. She also undertakes a concert tour of Paris and Scandinavia with tenor Matthew Polenzani. Cambridge is clearly a soprano on the ascent.

What do you sing in the Porgy and Bess Suite?

I sing three different roles. It opens with Clara singing “Summertime.” She’s the young, hopeful light of Catfish Row. Bess reprises the aria later in the opera, when she takes care of Clara’s baby after she dies in the hurricane.

Then I sing Serena’s “My Man’s Gone Now.” It’s a very dramatic aria about her husband, who is killed in the first act by Crown. After that comes Bess’ part in her duet with Porgy, “Bess, You Is My Woman Now.” In “Oh Lord, I’m on My Way,” the big finale with chorus, I sing Serena’s high-lying line.

He’s fantastic. In Francesca Zambello’s production of Porgy and Bess at WNO in 2006, I sang Clara and he sang Porgy. We also worked together at Los Angeles Opera. Here we’re doing the Robert Russell Bennett arrangement and orchestration, and singing about 10 of the hit tunes and themes.

I will sing “Summertime” as Clara sings it in the show, and “My Man’s Gone Now” as Serena would sing it. I enter into different mind-sets, and this helps the audience experience the dramatic arc of the show. It’s a great challenge as a singer and actress to channel the different character of the person you’re about to sing, but I have time to do it during the pauses between arias.

You have spoken about not wanting to get typecast into “black roles.” Yet here you are, after recording The Diary of Sally Hemmings, singing in the Porgy and Bess Suite with the San Francisco Symphony. Are people trying to typecast you?

I don’t want to project what other people are thinking, or what is going on in their minds. I do know that I do get offered a fair share of roles that are clearly specific to singers of African-American heritage. I am very proud of my relationship with Porgy and Bess, which has afforded me wonderful opportunities. I’ve also sung the suite with some wonderful symphonies. I love the music, and I’m proud to be associated with the piece.

I’m not ashamed of my heritage; I’m a very, very proud biracial woman. My father, an economist at the World Bank, is Caribbean. He’s Guyanese, from the former British colony in the northeast corner of South America; it’s predominantly black. My father came here when he was 19 to go to college. My mother, who works for the National Academy of Sciences, is a Minnesotan of Danish and Norwegian parentage. I celebrate and embrace both sides of my heritage.

However, when you’re thinking about me professionally, you don’t want to be defined by something other than your skill. I think that’s true of most people in just about any profession.

I’ve been conscious of what roles I accept, and how many Porgy and Besses I choose to accept every year. I certainly don’t accept them all. Mimi in La bohéme and Donna Elvira in Don Giovanni are suited to me just as much as Clara in Porgy and Bess.

Do you ever read Opera Now from the U.K.? There was a back-page piece by Adrian Mourby in the March/April issue titled “Seeing Is Believing.” It decried “colour-blind casting” in cases where Mourby believes it does not make dramaturgical sense, such as the historic impossibility of a black Pinkerton in Madama Butterfly, or a black Otello singing opposite a black Iago in Verdi’s Otello. How do you react to that kind of thinking?

I would ask him, if it’s supposed to be realistic, what do we say about Romeo and Juliet being sung by two people in their mid-40s? There is a lot of suspension of disbelief when you go to the opera. People don’t walk around singing to each other in everyday life. People portray people that are not the same age or station in life. I’m sorry, but the editorial is ridiculous.

I feel a bit sorry for anyone who would come into any artistic performance with such a closed mind. It inhibits their enjoyment of what could be a wonderful performance.

I saw a Shakespeare in the Park production here in New York last summer where several white characters were played by African-Americans. It wouldn’t have happened in Shakespeare’s or Othello’s time, but it was an excellent performance. I don’t think there was anybody in the audience that didn’t believe what was going on on that stage.

You’re not really African-American, are you?

No. I’m Caribbean-American. While I was born in the United States, I believe my cultural experience is different from someone whose parents are African-American. My father’s experience was as a black man who grew up in Guyana with parents who were from Ghana in Africa, which is a very different cultural and political experience.

I wasn’t aware of race until others pointed it out to me. I grew up in a fairly affluent suburb of Washington, D.C., and went to 99.9% white private schools my entire life. It wasn’t until children in school asked why my mother was white and my father black that I even thought about.

My parents did not discuss race in our household. We were humans, we loved each other, we were a family; that was it. It was other kids and families who first made me aware that our family was different. When I was 6 or 7, I’d tell white kids, “Oh, I’m just like you except that I have a permanent tan.”

I was constantly made aware that I was “different.” I think because my parents are so open-minded, and had such a strong relationship, that it didn’t really affect me.

How is your career feeling to you?

I’m entering a new stage in my career where I’ll be working in Europe a lot in the coming years. It’s such an exciting time! I’m so looking forward to all these new opportunities that have been coming my way.

I absolutely love what I do. I really do. I consider myself to be so blessed and lucky to every day do something that I actually find fun. I love the creative process, I love the rehearsal process, I love being onstage, I love working with my colleagues. I really love it. I hope that comes across in my performances, and that I’m able to touch people.