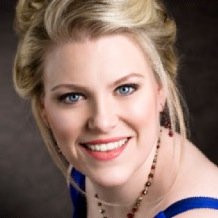 Erin Wall, who made her San Francisco Symphony debut in 2004, has become something of a Bay Area favorite since then. The Canadian soprano, who began her career singing Mozart and Strauss roles, has joined Michael Tilson Thomas and the orchestra in a variety of concert works and appears on the orchestra’s 2010 Grammy Award–winning recording of Mahler’s Symphony No. 8. Starting this week, she returns for two S.F. Symphony programs. May 27-29, she’s the soloist for Robin Holloway’s Clarissa Sequence, as well as Mozart’s scena for soprano and orchestra, Bella mia fiamma ... Resta, o cara. Schumann’s Symphony No. 3, “Rhenish,” completes the program. On June 10-13, Wall joins MTT and the orchestra in Berg’s “Lulu” Suite in a program that also includes Wagner’s Overture to The Flying Dutchman and Beethoven’s Violin Concerto, with James Ehnes as soloist. Wall spoke to SFCV from her home in Toronto, where she lives with her husband, an administrator with the Canadian Opera Company, and their seven-month-old son.

You’ll be doing two programs with the San Francisco Symphony, beginning with the Clarissa Sequence. Have you sung it before?

No, it’s absolutely new to me. This is an American premiere. It’s been done at ENO [English National Opera], and that’s the only other time.

This is a dramatic scene drawn from Holloway’s opera Clarissa. What can you tell us about it?

It’s a little bit like a mad scene, without all the coloratura. My impressions of it are based solely on my reading of the score, because I have not been able to hear a recording of it. I don’t think one exists. So I’m a little anxious, because I won’t have a full idea in my head of what it will sound like until we get to rehearsals. But I’m guessing it’s about 15 or 20 minutes. The story is Clarissa, from the Samuel Richardson novel; in this scene she’s been imprisoned by her family, particularly her father, who wants her to marry a guy she doesn’t want to marry. She’s reading a letter from her confidante, Anna, and thinking about what she wants to do and how she’s going to stick to her morals. At the end, she hears the voice of her father saying she should be bricked up and imprisoned forever. At this point she’s still in love with Lovelace, although later on in the larger Clarissa story she doesn’t want to be with him anymore. But this scene is pretty early on in the story.

What can you tell us about the music? What do you find attractive about it?

It’s vocally friendly. The music has lots of lovely high notes, and the harmonies are quite pretty. There are a lot of mood changes. She’s very impassioned, then becomes more reflective and more desperate at the end. So she has a nice arc. I think it will show quite a range. I’m actually quite excited to see what it will be.

And excited about doing it with MTT? You’ve worked with him quite often.

Absolutely. He’s definitely a singer’s conductor, and I like that he knows what he wants from the minute you go into rehearsal. That makes it smooth sailing, which is great. I also enjoy his complete commitment and his energy during the performance. You never look at him and sense any flagging of commitment. He’s very singer-friendly, and he never asks you to do anything that’s unfriendly to you. He’s very easy to work with in that way.

The Clarissa Sequence will be paired with Mozart’s Resta, O cara. Why is it a good companion piece?

I think it was paired to give me something familiar and something unfamiliar. Resta, o cara I’ve sung a bunch of times before, and they asked me to offer several choices of Mozart arias. Again, it’s a very dramatic scene — long and very bravura at the end.

Is singing new repertoire more rewarding than these kinds of standard pieces you’ve done before?

It’s unfamiliar territory, which can be more difficult. At the same time, new repertoire can be very freeing. The weight of expectation of X singer and Y singer who did it before isn’t held up to you. In a warhorse you always get that portion of the audience who have heard all the recordings, and you’re beholden to the performance tradition. So doing something like Clarissa, which I’ve never heard and maybe no one in the audience has heard, frees you from that. It’s new to everybody’s ears.

Then, for something completely different, you’ll be back in June to sing the “Lulu” Suite.

Yes! The “Lulu Suite is — well, I’ve never approached anything remotely like it. It’s so difficult, such a challenge, that I’m actually enjoying it! Every time you successfully navigate your way through it, it’s galvanizing. It’s a great challenge. The hardest thing is finding where you fit into the texture. And being more or less around the correct pitch all the time is a huge challenge. Luckily, my portion of the suite is only two and a half to three minutes, so it’s all about finding where you fit into it.

Is this a role you will sing in the opera house?

I seriously doubt it. I think it’s something I can manage in concert. But most people are looking for a different voice type in the role. Plus I’ve heard it takes about three years to learn. It’s not the kind of thing you can pick up in a couple of months. I’ve only seen it produced once, in Chicago, and it blew my mind. You know, when you’re a singer and you go to see a role, you’re always thinking in the back of your mind, Is this something I could do? So I was blown away that anyone learns it. Dramatically, it’s one of the most challenging roles in the soprano repertoire.

You started your career with Mozart roles, and then moved on to Strauss. You’ve also sung Mahler in San Francisco — and recorded Mahler’s Eighth with MTT and the Symphony. Was that a good experience?

It was fantastic. Most of us had performed it with MTT and the orchestra on tour, and had a wonderful experience. It was good to come back to it. The interpretations had changed a little bit, but the audiences were fantastic. It’s nice to listen to it now. It sounds like a studio recording, but it’s nice to know that it’s all live performance.

How does singing in the opera house inform your work on the concert stage?

I think it’s almost more difficult on the concert stage. You feel more naked because you don’t have costumes or sets. You have to, in such a short time, become whatever character it is, and decide how far you’re going to go in terms of characterization. It’s different with something like a Mahler symphony where, at least in the first half, you’re not really a character. In the second half, you can characterize it a little more. In the Mozart concert aria, you’re completely a character, and you have to establish it in a very short time. And the most difficult thing in the concert experience is that the rehearsal time is very, very short. The journey from first rehearsal to opening night can be 48 hours or less, so you have to get your act together in a very short period of time.

Later this summer, you’ll be singing all four soprano roles in Offenbach’s Tales of Hoffmann at Santa Fe Opera. Are you preparing for it now?

Absolutely. It’s sort of equal parts: one hour of Clarissa, one hour of Lulu, and two hours of Hoffmann every day. Hoffmann is a big chunk of singing, and in the version that we’re performing — the Michael Kaye critical edition — the roles are designed to be sung by one singer. In this version, both Olympia, the traditional high coloratura part, and Giulietta, which is sometimes sung by a mezzo, are high coloratura, with a big chunk of lyric soprano with Antonia in the middle. In the end, in some versions, Stella doesn’t really sing at all; in this version she sings quite a bit. There’s no aria for her, but she does sing in the ensembles. So it’s going to be a really big night; I’m anticipating I’m going to need an IV with some kind of special nutrients! Especially because Santa Fe always presents special challenges — it’s high and it’s very dry. In my previous experience there, with Strauss’ Daphne, that was 90 minutes with no intermission. At least with Hoffmann we will have intermissions. But I’m excited. This is probably the greatest challenge I’ve taken on.

So in between all these desperate characters, what does Erin Wall do to balance her own life?

Well, I’m a new mom. My son is seven months old, so that’s pretty much what I do. Before that, I used to do a lot of running, and I’m slowly getting back to that. I hope to do some of that in San Francisco — weather permitting.