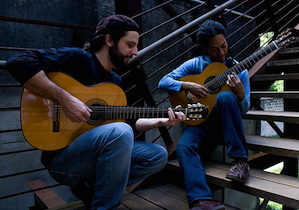 “There are two new kids on the classical guitar block,” heralded Rick De Yampert, writing in the Daytona Beach News Journal. “They’re from Brazil,” he continued, “and they’re armed and ready with the music of São Paulo’s streets.” The references to classical and street music within the same sentence and the allusion to a popular fin-de-siècle boy band were likely intentional and certainly appropriate in application to De Yampert’s subject, the Brasil Guitar Duo. Young, attractive, and talented, Paulistas Douglas Lora and João Luiz have both established new homes in the U.S., where they’ve become favorites of summer festivals and progressive presenters, as well as recording artists, showcasing an eclectic repertoire in all these contexts. The Omni Foundation brings them back to San Francisco this weekend for another mixed set at the War Memorial’s Green Room. Lora spoke with SFCV by phone about the Duo’s Brazilian roots and its several global missions.

Concert Artists Guild, in New York City where you’re living now, chose your Duo as the winner of its International Competition in 2006, and they started showcasing you in their New Music/New Places program. Is that a good fit for you and João?

Yes, and the guitar is an instrument like that: It can be popular and classical at the same time. And our program fits well in jazz clubs and world music festivals. We are taking this music to new audiences, and that’s a very rewarding thing for us. It works both ways: We take classical music to audiences that are more used to jazz and Brazilian popular music, and we bring the popular music to people used to classical concerts.

What kind of venues has that gotten you into, outside the concert halls?

Well, some jazz clubs, the World Café Live in Philadelphia, and here in New York there’s Joe’s Pub and Barbès, in Park Slope [Brooklyn]. We play there often; it’s a small venue that’s a bar, and in the back there’s a little space for music, every day of the week. The first set is mostly classical music, and then the second is jazz or world music. We just love this place.

Which set does the Duo fill?

So you stick around to listen to the second?

You and João appear ethnically different in your photos, but I know that’s not a big deal in Brazil. Are there any other differences that you bring together?

I think João started more into Brazilian music; he listened to samba and some jazz. And I spent my teenage years playing and listening to progressive rock. Right after that, I started to play Brazilian music — choro, samba, maxixe, baião [some of these are regional styles] — and João had since the beginning. But these differences are a minor thing, because what’s really important is that both of us started with popular musics, and only when we were about 15 or 16, we started to play classical guitar. We had already developed our ears and a sense of improvisation, but there’s a lot of classical musicians who just play from a piece of paper in the front. Fortunately, that’s not our case. [Chuckles]

Guitar duo is good, because you can really explore each part and make it challenging for the players – Douglas Lora

Any significant differences in technique?

We bring different tones: I think João’s tone is brighter, and that works very well for the upper melodies, and I have a darker sound, which fits well for the bass lines. But we have the same school of thought, because of our teacher [in São Paulo], Henrique Pinto. He developed in us this sense of how we should make the guitar sound, and what we have to search for in our practicing.

I’m assuming your tone might have something to do with your seven-string guitar, an instrument I became acquainted with when I was writing about [Brazilian guitarist] Yamandu Costa.

A good friend of ours.

Was there a particular reason you went for the extra string?

I started playing with seven strings five or six years ago. It’s only four or five notes more, on the low end, but it adds a whole universe. I love the bass lines and runs that it does. Now we have a much longer range of notes, so we can play most of the repertoire written for the harpsichord, the Baroque; it’s almost the same tessitura. I heard once Odair Assad (or was it Sergio?) saying that the seven-string guitar is the guitar of the future.

Who made both our guitars is Sergio Abreu, from the Abreu Brothers. When his brother Eduardo stopped playing [they’d been a performing guitar duo, peers and fellow countrymen of the Assads], Sergio started building guitars, and nowadays he’s one of the best makers in Brazil. My guitar is my baby: I saw it when it was born, and I’ll have it for my whole life.

Did you have it before you and João recorded Bach’s sonatas for flute and harpsichord (Avie Records, 2010)?

No, and that was a shame. We had to use alternative tunings with the six-string. We did it with a flute player, Maria Piccinini, and both of us did the harpsichord part. Guitar duo is good, because you can really explore each part and make it challenging for the players. Because we play together for so long, we’re able to split scales in the middle, and it sounds like one. But now that I have the seven-string, a lot of the bass parts are mine.

I think mine are more on the melodic side, while João’s are more intricate, rhythmically, harmonically. – Douglas Lora

On a couple of earlier releases by Naxos, you guys were the first to record the complete works of [Italian composer] Mario Castelnuovo-Tedesco.

Which was an honor for us. Tedesco started writing for guitar because of Andrés Segovia, who encouraged him, “please compose this and that.” Then he met [the French-based married duo] Ida Presti and Alexander Lagoya, and he started to compose for two guitars.

What about Brazilian composers?

The elements of the folk music of Brazil are very rich, rhythmically, melodically, so composers, more and more, have used these elements in their classical compositions. We have Heitor Villa-Lobos, the biggest name, and Camargo Guarnieri, and Marlos Nobre.

Yeah, his concerto was written for us; it was a big dream come true this June. We did the premiere of that piece [with the São Paulo Symphony Orchestra, under Giancarlo Guerrero]. We’ve known Belinatti for a long time, we’re good friends. And we’re gonna play that piece again with an American orchestra, during this next season.

Is it a particularly Brazilian concerto?

That’s a very good question, because I was talking with you about the countryside of São Paulo State, which has a style completely different. It’s called “Musica Caipira,” and they do these songs called modas de viola, where they sing with vocal harmonies, maybe two voices, talking about the simple things of life, and they have this 10-stringed viola caipira. It’s beautiful music, so it was a great contribution by Belinatti, because his concerto is about those influences.

Are you and João contributing original compositions to your performing repertoire?

Yes, and there comes a difference, ’cause I think mine are more on the melodic side, while João’s are more intricate, rhythmically, harmonically; there are jazzy elements, maybe more intellectual, but without losing the expressivity. What I can say about my style is this: I like music you can whistle! I also write a lot of songs with lyrics, since I was really young.

What will you guys be playing this weekend at the Green Room?

We’re playing one Prelude and Fugue by Tedesco. Besides that, Rameau’s Theme and Variations and The Cyclops, transcribed by João; he’s in charge of arrangements. There will be two of my compositions, Waltz and Postlude, and we are playing the Prelude from Bachianas No. 4, by Villa-Lobos. Three pieces by [sui generis Brazilian] Egberto Gismonti; his melodies are very simple, but the word “powerful” fits them well, and they are the favorites of the audience, everywhere we go. Two compositions by João, and one by Edu Lobo, a famous songwriter and composer [associated with bossa nova]. What else? We’re playing a piece by [older Brazilian classical guitarist] Marco Pereira; we played in San Francisco with him.