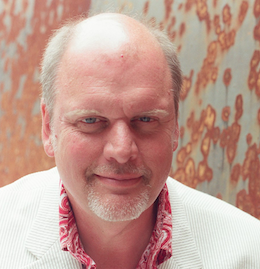 The sweet spot for an artist is to create genuinely creative, important work that also has broad public appeal. Frank Lloyd Wright certainly achieved that goal; composer Michael Daugherty hopes he is doing the same. His imaginative but accessible style will be on display Wednesday through Saturday nights, when violinist Nadja Salerno-Sonnenberg and her New Century Chamber Orchestra (NCCO) present the world premiere of his Fallingwater, a piece for solo violin and strings. As he discussed in a recent interview, the 59-year-old University of Michigan professor — one of America’s most-performed living composers, and a three-time Grammy winner — often finds inspiration in either history or pop culture. This new work is no exception: It was inspired by the architecture of Frank Lloyd Wright.

Your previous violin concerto, Fire and Blood, is one of your most acclaimed, and most performed, works. Was it a bit daunting to write another?

Oh, yes. Often, if a composer has written two or three violin concertos, we only know the first one of them. Many composers become so self-aware that their later music becomes academic, to some degree. So it’s quite a challenge.

How do you avoid that second-piece pitfall?

Part of it is the new instrumentation. I love the sound of string instruments. In a lot of contemporary music today, the strings are overshadowed by the brass and percussion. They’re almost in the background. Works are over-orchestrated, in many cases. This is a reminder of all the things strings can do, and what a beautiful sound a string orchestra can make.

I also try to take the concept of melody even further than I did in the first concerto. I tried to take elements I like in Fire and Blood and take them a step further. I had various violinists who came to my house. I composed parts of the piece with them in my studio. I wanted to discover the energy zones of that instrument — how to make vibrant, powerful sounds.

So you had instant feedback on what you had written?

Exactly. A lot of theater and dance is done that way. I first wrote the violin part without any accompaniment. I wanted to make sure it sounded exciting and satisfying, and had a lot of depth to it. I then orchestrated around it.

Did you have Nadja Salerno-Sonnenberg’s sound in mind as you were writing?

Definitely. She gave me a couple of do’s and don’ts — different kinds of techniques she prefers and others she isn’t crazy about. I listened to those. Probably a lot of other violinists feel the same way!

The piece was inspired by the architecture of Frank Lloyd Wright. In fact, each movement was inspired by a different Wright building: Taliesin, Fallingwater, the Unity Temple, and the Guggenheim Museum. You write in your program notes that inspiration struck when, on a trip to Taliesin, Wright’s rural Wisconsin home, you noted a large circular wooden music stand with four sides, designed for use by string quartets.

I thought about this piece for a long time before I came up with the idea of using Frank Lloyd Wright as a starting point — his love of nature, his turbulent personality, his invention of organic architecture. I’m the kind of composer where I have to have the concept before I start writing a work. When I saw the string quartet furniture that Frank Lloyd Wright had designed for Taliesin, all of a sudden it hit me that this would be the subject matter for this piece. He was a huge fan of string music.

Have you long admired his buildings?

I’ve always been a fan of Frank Lloyd Wright and the way his architecture is integrated into nature. I built a house in Ann Arbor around 20 years ago. I hired an architect. The house is set back in nature, with a lot of trees. I’ve always been intrigued by space, and how it’s used. That’s something I think about when I’m writing.

What do you mean by that? Space is obviously a very different concept for an architect and a composer.

I’m intrigued by the way that we perceive space. Often, when you go to the store and see a piece of furniture, you’ll think, That’s going to fit. Then you take it home and realize it’s too big. It takes a long time before you’re able to go into the store and think, The smaller one is probably going to fit better.

It’s the same thing with how much information you want to put into a piece of music. Some composers think it’s really cool to write super-complex music, which is so dense, with so many layers, that you can probably catch 10 percent of the piece on first hearing, and maybe 20 percent of it the second time. And that’s only if you’re a trained musician! For a majority of listeners, the piece just goes way over their heads. So you’ve got composers writing music for other composers.

When I saw the string quartet furniture that Frank Lloyd Wright had designed for Taliesin, all of a sudden it hit me that this would be the subject matter for this piece.

[In contrast,] Frank Lloyd Wright created architecture that spoke to ordinary people, but architects liked his designs, too. His architecture has broad appeal. That’s my goal as a composer, as well. I think I did that with Fire and Blood. I hope I do it with Fallingwater.

Given that populist attitude, I was surprised to learn that you studied with several avant-garde composers, including György Ligeti.

I wanted to understand everything. Being from Iowa, I never wanted to be a “naive Midwestern composer.” So I set out the cutting-edge composers of the day and studied with them, or went to their master classes.

My eventual conclusion [as to why they wrote such difficult, dissonant music] was that it was cultural. They were coming out of a particular time — Europe during the Second World War. Their experiences growing up were very different from mine, so it only makes sense that their music would be very different from my music.

Ligeti was very critical if you wrote music that sounded like his. He would say, “You have to find your own path,” and emphasized that when you did so, chances are your music will be radically different from what your teachers wrote. Hearing that from someone like Ligeti, one of the greatest composers who ever lived, gave me freedom to follow my own instincts.

I never wanted to be a “naive Midwestern composer.” So I set out the cutting-edge composers of the day and studied with them.

And for you, that sometimes means taking inspiration from pop culture, such as Superman for your Metropolis Symphony. Does working off a familiar icon kick-start your creative process?

I need to have a framework, an attitude toward the piece I’m writing. I’ve dealt with darker subject matter, like J. Edgar Hoover or [the trials of] Rosa Parks. Others are more pop.

One of the ways I strive toward complexity in my music is not by adding more notes, but by adding a cultural layer to the composition. That becomes an additional layer of counterpoint. This allows the listener to become an active participant in the performance.

So if a person hears the final movement of your new concerto, which was inspired by the Guggenheim Museum, you’d like them to remember being in that building as they hear the music?

Yes. My music is abstract; it’s not narrative. But I grew up in an era of abstract music that resisted any connection to the culture of its time. If composers used any cultural references at all, it had to be from ancient Greece, or obscure 17th-century Italian poetry.

One of the ways I strive toward complexity in my music is not by adding more notes, but by adding a cultural layer to the composition. … This allows the listener to become an active participant in the performance.

You went in quite a different direction when you referenced Superman.

I have always been a huge fan of ’50s and ’60s comic books. I have a collection of them at home, which are sitting in a stack in my studio. I had the idea and I went with it.

I try to make every piece an event. For all those years when I played lounge piano to make a living, it didn’t matter to me if there were 10 people in the place. I always wanted to do my best, and “put on a show.” Today, no matter what I’m writing, I want to write the best piece possible. I spend a lot of time revising and fine-tuning.

Even during rehearsals the week of the premiere?

If there is sufficient time, yes. I’m looking forward to the first rehearsal of this piece. They [NCCO] are such a great group of musicians, and they all really want to be there!