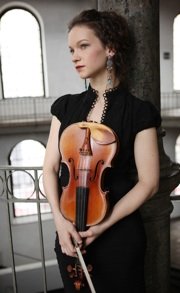 Violinist Hilary Hahn catapulted into the international spotlight as a teenager, when the uncommon maturity of her debut recording of three of J.S. Bach’s Sonatas and Partitas shot it to the top of the charts. Now all grown up at 31, she continues to exude youthful charm in conversation, speaking in a quasi–little girl voice without a trace of pretense or affectation.

In the wake of her new recording of concertos by Jennifer Higdon and Tchaikovsky, Hahn and her frequent recital partner, Valentina Lisitsa, return to Herbst Theatre on Feb. 19. Much of our talk centered on her repertoire: Tartini’s Variations on a Theme by Corelli; Beethoven’s Violin Sonata No. 5 in F Major, “Spring”; Ives’ Sonata for Violin and Piano No. 4, “Children’s Day at the Camp Meeting”; Bach’s Partita No. 1 in B Minor; and George Antheil’s Violin Sonata No. 1.

What led you to choose the particular pieces on the program?

The Tartini Kreisler/Corelli is something I’ve been wanting to play for a long time. I played it when I was much younger — I think I learned it before my teens, when I was 10, 11 or 12, something like that. I heard it at one of the first two recitals I went to, and remember the experience pretty clearly. I thought it would be nice to bring it back into my active repertoire.

The Bach is something I haven’t played on tour for a while, but it’s definitely part of my active repertoire. It’s unusual in that it has all the double movements. It has one movement, and then what’s called a double. They can actually be played harmonically and lengthwise simultaneously. I have experimented with that in the past with other performers.

Higdon and Hahn Strike It Big

What do you mean by a double movement?

I really can’t explain what it means [laughing]. It’s like a variation. It’s like you have the theme movement, then you have another movement that has exactly the same number of bars and the same harmonic changes at the same point, but it sounds like a different piece.

And you’ve tried playing the two together with other performers? How does that work?

It sounds kinda weird, but structurally it does work. A couple of them work better than others. So it’s eight movements in pairs. I’m not sure it was meant to be done that way, but it’s interesting as a study. Of course, you have to use a different character when you play them both together than when you play the two individually, because the one character of a movement influences the other.

Do we have any idea why Bach wrote two consecutive movements with exactly the same number of measures?

I wish I could say I do. I’m sure some scholar or people who specialize in early performance would have an answer, but I don’t actually know. It would be very interesting to find out.

He loved to test his limits. He had, what, 14 children?

[Cracks up] That’s one way to look at it.

No one has been able to sufficiently explain it to me. I have asked many people. I’m just probably not asking the right people. Maybe you can find out. I’m really curious to know why he wrote it that way and what the structure is supposed to be, because that would influence how I perform it. None of the other sonatas and partitas are written in the same form.

Cool. Let’s visit the Bad Boy of Music. He’s probably been climbing up the front of a bookstore while awaiting his turn.

The Antheil is like rock ‘n’ roll and minimalism all together in classical music. That sounds really awful, but it’s a very contagious way of writing, and it’s extremely fun to play. He actually used a lot of repetition, which creates tension and resolution in a way that you don’t often see in a sonata. I really enjoy that aspect of it.

It’s very rhythmic, very atmospheric at times. There’s plenty of variety. There’s also plenty of stuff that sticks in your ear, I think.

Of course, it was way before rock, and way before minimalism. It was written in his early period, in 1923 in Paris, when he was throwing things in people’s faces and trying to shock them.

Yes. Exactly. But those musics are our form of reference now. So if you listen to it, it’s like the spirit of rock ‘n’ roll and some of the structure of minimalism. But it’s in classical music. It’s hard to say where these ideas originally came from.

How about the Beethoven and Ives?

The “Spring” sonata is actually something I learned last year. I’ve performed it, but I haven’t yet toured it. She [Valentina Lisitsa] had played it before, but I hadn’t. It’s neat.

I learned it, the Ives, and the Antheil with Valentina. It’s nice we’re developing our joint repertoire. The Ives we recorded, for release later this year. We recorded all four sonatas last year, and we’ve been playing them for a few years. We enjoyed playing them, so we decided to keep that up.

When you learn something like Beethoven’s “Spring” sonata, do you listen to other people’s recordings?

I do when I’m first getting to know it, because I want to know the traditions. I want to know how everything comes together. I like to hear the other parts besides the violin parts. If it’s a sonata, I listen to the piano. If it’s a concerto, I listen to the orchestral part. But then I have to stop at some point and allow myself to hear it fresh so I can see what I think of it interpretively, and see what ideas I come up with.

Who are the violinists you go to for Beethoven to really hear the tradition, as far back as recordings go?

Kreisler, Grumiaux, Toscha Seidel if he recorded it. Elman I find interesting. Bronislav Gimpel. There are a lot of players in previous times who recorded these pieces.

Here you are at 31. You started out at a really young age. Is your career proceeding as you envisioned it? Where would you like to go in the next 10 years?

I made a point of not having particular overreaching goals. I work one project at a time, a couple of years in advance. Other than that, I don’t want to say, “This is where I’m heading,” because there are things that could crop up that I wouldn’t see if I were so intent on a particular direction or path. So I don’t think I ever envisioned it at 21 versus 35 or anything like that.

I’m definitely doing what I want to be doing with my career. That’s what I focus on. I’m really interested in the projects I’m doing, and I’m having a great time.

As far as where I’m going in the future, it’s the same time. I think long-term, but more for season planning. I do every season’s programming a little differently, because it’s fun to have the variety. I want to be able to have some freedom to do things that aren’t scheduled that far in advance, so I try to allow some flexibility in my schedule to make that possible.