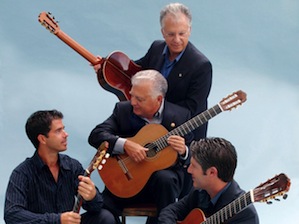 There’s evidence in Del Mar, California, that a family that plays together stays together. That’s where you’ll find brothers Celin, Pepe, and Angel, founding members in the 1950s, with their father, Celedonio, of The Romeros, arguably the world’s best-known and most competent classical guitar quartet. Celedonio, who emigrated with his family to the United States in 1957, passed away at age 83 in 1996. But he’s survived by a musical family extending down to great-grandchildren, most living in that same part of San Diego County. Celedonio was replaced in the quartet by Lito, Angel’s son, and Angel himself was replaced by his nephew Celino, son of Celin. Although several Romeros perform and record separately as soloists, their configuration and competency has made the quartet a favorite of composers, including Joaquin Rodrigo, Morton Gould, Federico Moreno Torroba, and Lorenzo Palomo. Just before a rehearsal at their Del Mar home base for their upcoming tour, 68-year-old middle brother Pepe chatted with SFCV.

Did your father, Celedonio, who’d been a soloist in Spain, expect you to form a family group?

No, he didn’t have expectations, it just happened. And he was delighted. His expectation always was that whatever we’d want to do would be good, and right. He actually inspired us to play.

Who had inspired him?

The pupils of [19th century composer and guitarist Francisco] Tárrega.

Spain has rather dominated classical guitar.

Because the guitar comes from Spain, it’s been the voice of Spain, the national instrument.

Though it arrived, in a different form, from the Middle East.

When the Moors came to Spain in 800, it grew out of that. Just like the violin and the other strings instruments which came out of that time …

You kids had classical music at home, but also flamenco.

Everybody in southern Spain was exposed to flamenco. And being musicians, we loved it. There were lots of great artists, both classical and flamenco, as well as painters and poets and everybody, gathered in my house. They were all good friends of my father and mother. My house was an artistic center.

Did things become more difficult before 1957, when your family left Spain?

Things were already very difficult at the time I was born, because it was the post–Civil War time.

Did [Spanish dictator Francisco] Franco have any taste for music?

You know, I don’t think that Franco was very musical at all. His attitude was against anyone who had fought against him. It was a brutal dictatorship, let’s say.

Tell me about how you developed as kids on the guitar.

When each of my brothers and I were born, almost immediately we got toy guitars. And we were always taught how to treat and respect them. … By the time we were old enough to start playing — 3, 4 years old — then we got playable guitars. I had a beautiful Italian 19th century guitar that I learned how to play on. And then, by the time I was 7, I moved to a regular-sized José Ramírez [a turn-of-the-century Madrid luthier]. My father was a believer that even the young player should have a beautiful guitar, because a good guitar teaches you how to play better. It inspires you, and you are able to get a more beautiful sound and think about how to produce beautiful tones. So we always had a fine instrument to play on.

Who makes the instruments you use now?

Has he kept to the classic Spanish style of guitar?

It’s completely a traditionally made guitar, all wood. … But made in such a way as to produce incredibly beautiful sounds. You will hear it, it’s gorgeous. He was here earlier, because his workshop is in my house. My brother Celin and I moved into what had been my parents’ house in Del Mar. And we built a studio for my son to make guitars. So he’s here every morning; it’s a lot of fun.

One of the things that music and the guitar have done is, preserve the unity of the family in a very, very unique and close way.

My father was a believer that even the young player should have a beautiful guitar, because a good guitar teaches you how to play better.

Aside from our delighting in the sound of four virtuoso guitarists, there’s something about the sound of a family, isn’t there?

Because we know each other so well that we can feel music in a united way.

How do you allocate the musical responsibilities in any given piece?

And that’s what you have in mind when you arrange your own and others’ compositions?

Exactly. But, at any given moment, because we’re playing on four guitars with the same range, we can switch.

Has anything in your repertoire changed with time?

The style of repertoire has not changed. The repertoire has of course changed, but we continue to play the traditional Spanish and classical music for guitar.

Is there a lot of new composition for classical guitar?

Yes. And all over the world. The guitar is one of the most popular instruments, if not the most.

The fact that it’s so pleasurable to play it, from the beginning. You don’t have to be a great guitarist to enjoy playing it; you can play two or three chords and accompany yourself to sing, and it can be totally enjoyable. Although it’s one of the most difficult instruments to master, it’s one of the easiest to get started on.

One of the things that music and the guitar have done is, preserve the unity of the family in a very, very unique and close way.

You have grandchildren who are playing?

Yes, I do. And they’re playing very well! Pepe’s child is only 4, and he’s already beginning. Pepe’s daughter is the youngest of my grandchildren, and the oldest is 18. They’re all playing the guitar.

This suggests the Quartet will continue.

Is there anything about what’s happened to the guitar which you don’t like?

I don’t like people who have developed a dependency on amplification. It’s okay when it’s needed, but not all the time, and not as a crutch.

How do you guys mic your concerts and recordings?

For example, I can tell you that the concert I’ll play after San Rafael will be at Disney Hall, with the L.A. Philharmonic. I will not need amplification there; I already know the hall. It’s a magnificent hall.

Will we be hearing both old and new pieces in San Rafael?

That’s for sure. And it will be heavy on the Spanish repertoire.

You will hear at least one.