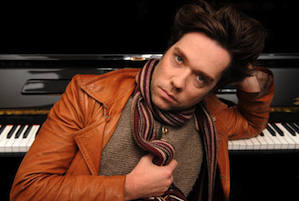 Rufus Wainwright has had 2½ years to explore and celebrate family and musical values since the last time we got to chat with him and applaud him at Davies Symphony Hall. This Sunday there he’ll be again, showcasing some of his original songs from Out of the Game, his release last year on the Verve label. It makes for a program less artsy and introspective than his previous visit to Davies, when he premiered his setting of Five Shakespeare Sonnets with the San Francisco Symphony. And it will be a solo more evocative of the heady pop fizz with which he ushered out the 20th century and made himself a star, as recognizable for his plangent tenor voice as for his equally sweet good looks.

He traces his songwriting pedigree to his late mother, Kate McGarrigle, and to his father, Loudon Wainwright III, both of whom performed their own material, though they divorced when Rufus and his musician sister, Martha, were small. His classical training included 16 years of piano lessons, time at the McGill Conservatory in Montreal, and a conversion at age 14 into what Wainwright, who is gay, calls “an opera princess.” In this second brief interview with SFCV, Wainwright takes a lighthearted look at his life’s changes and challenges.

Last time you were here, singing your Sonnets, people weren’t supposed to applaud till the end of the set.

This time, they’ll be able to clap in the middle of the song, I don’t care! [Laughs] I’m going commando these days. But speaking of the Sonnets: We just did a very, very successful tour of them in Europe — in Dresden, The Hague, and Sweden. And that was all with orchestra. But in order for me to be able to do those orchestra shows, and do band shows, I also have to go off alone and, you know, make money! Joyfully so; I love it. But it is the most economically viable and also personally satisfying thing for me to do, to just sell my wares and go to the next city the next night. It’s the tradition I grew up in, the troubadour tradition, with my parents, and I feel it necessary to go out there alone every once in a while and give ’em The Rufus Wainwright Treatment.

Is that what you were doing with the latest album?

I made Out of the Game because I needed to have a good time at that point in my life. The album before, Songs for Lulu [also featured in his last Davies appearance] really reflected the darkest period of my life, which was my mother’s passing. And I, like a lot of artists, just had to go for the jugular, and create what I was feeling. But it was exhausting after a while, being so sad. [Chuckles] So when it came time for Out of the Game, it was just necessary that I celebrate life and have a little bit of silliness here and there, and just make a record that sounds good at a party.

I grew up in the troubadour tradition, with my parents, and I feel it necessary to go out there alone every once in a while and give ’em The Rufus Wainwright Treatment.

And you had particular life moments to sing about.

Yeah, the birth of my daughter. [Viva Katherine Wainwright Cohen was born in February 2011, the posthumous fulfillment of one of her namesake grandmother Kate McGarrigle’s last wishes; her mother is Lorca Cohen, daughter of Canadian singer/songwriter Leonard Cohen.] And there was my marriage [in August 2012, to German-born Jörn Weisbrodt, artistic director of Toronto’s Luminato Arts Festival]. And hell, I’m celebrating my 40th birthday this year! July the 22nd, and that night, they’re doing scenes from my opera [Prima Donna] at the Royal Opera in Madrid. And I’ll be performing, as well.

What made you two decide to tie the knot?

I’ve been with my husband for about eight years, but it had to do a lot with what was going on in our lives, and also politically, in New York State [which legalized gay marriage in July 2011]. And, having a child, I wanted to establish a structure — mostly for Jörn’s sake, ’cause I know he’s gonna put in a lot of time to be around my daughter. She lives with her mother, Lorca, who has custody, but we visit. I wanted Jörn to have a legal position. And then also — I love him! [Laughs] But then also, in New York there was so much going on with marriage equality, and it seemed like a good time to move the cause forward with human rights and all.

In New York there was so much going on with marriage equality, and it seemed like a good time to move the cause forward with human rights and all.

You’d mentioned in your website bio that your mom’s passing [in January 2010] made you “slightly tougher and wiser.”

I think when my mom was alive, she definitely was my number one fan and my number one critic. [Laughs] She was brutally honest with both her adoration and her sense of taste. So we had a pretty intense relationship. And I think, once I lost that megaphone of appreciation, I very much had to just do it for myself, and hope that her spirit was happy. But on a more practical level, I’m the only one who can keep it going. [Chuckles] And be a man about it.

And that’s apparent in Out of the Game?

To what degree does “yourself” like what you’ve done?

I think I’m doing OK! Any kind of way of being satisfied or fulfilled or successful in your own goals in life, that will emanate and bring positive people forward. It also makes certain people really angry! [Laughs]

Now, I’m going right back to writing another opera, so I’m in a ping-pong world right now.

It seems to have been important to you on this disc to channel the ’70s. What was spinning on your “inner jukebox” while you were working?

A lot of that I would put in [producer] Mark Ronson’s hands; he’s the expert on actual albums. But I definitely grew up with Fleetwood Mac LPs, and Joni Mitchell. I’m a huge fan of the Philly Sound, and I’m a big Harry Nilsson fan, Randy Newman — all of those guys. I think it was a period when songwriters could be somewhat esoteric and unusual, and also have hit records. [Laughs]

Much of the McGarrigle Sisters’ music came out around that time, too; their Dancer With Bruised Knees is one of my desert island discs. Are you hearing your mom and your aunt [Anna McGarrigle] in your stuff?

Oh yeah, very much so. That album and their [eponymous] first one are, in my opinion, two of the greatest albums of the ’70s, on all fronts — how they sound, and the material itself.

You’d said at one point that, compared with some of your pop compadres, you’re more “centered in the classical world.”

It’s always there. But I will venture to say that I did attempt to shed it slightly for this [latest] record. For Songs for Lulu and also the Want records [Want One in 2003, Want Two in 2004], I was leaning heavily on it. For this one, I was more interested in a rock ’n’ roll approach. Also, I’d done a lot of classical work in the last couple of years, with the opera and the Sonnets, so I kind of needed a break. But now, I’m going right back to writing another opera, so I’m in a ping-pong world right now.

How much can you reveal to us about this new opus?

All I know is, I’m very influenced by Les Troyens, by Berlioz, so it’s gonna be big! [Laughs]