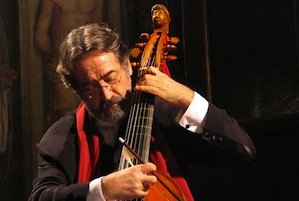 With the turn of the millennium, Jordi Savall sought to update the name of one of his early music ensembles, so Hespèrion XX, then a quarter-century old, became Hespèrion XXI. In practice, though, the 70-year-old Catalan native is unbound by time and place, extending his repertoire back beyond the Baroque and all along the routes traveled by the ancient instruments he plays, which include the viol, rebab, rebec, vielle, and bowed lyre: from Turkey in the east to Spain in the west, and from England in the north to Morocco and Algeria in the south. Since the 1970s, Savall has acted arguably as the most productive and successful exponent of early music, recording and performing with Hespèrion as well as La Capella Reial de Catalunya and Le Concert des Nations.

Until her death last fall from cancer, soprano Montserrat Figueras, Savall’s wife, was his regular collaborator, and they were joined by their children Arianna and Ferran Savall. Jordi Savall has also conducted and composed, contributing to period movie soundtracks including Touts les Matins du monde (1991). Next month Cal Performances will bring him back to the Berkeley Festival & Exhibition to showcase his boundary-busting musical mission under the banners of two album titles from his Alia Vox label, Orient-Occident (2006) and Istanbul (2009). Savall spoke with SFCV from Cardona, near his hometown of Barcelona.

Your manager alerted me to yet another of your historical adventures.

We are presenting the history of Jeanne d’Arc, through the principal texts of her time. We’re using a lot of music of the 15th century, but also some new music composed in the style of the times. It’s an incredible history, and a beautiful time for music, also.

So you had to do research in France?

Yes, of course, especially in Paris, in the Bibliothèque nationale.

Will there be a recording of this project?

Yes, this is coming at the end of May, but in America it will be later.

Will it be available here through Harmonia Mundi?

Do you relate to Jeanne’s trials as a Catholic?

I was born Catholic. [He chuckles] But I left my relation with the Catholic Church, because I have seen so many terrible things. My religion is music. [Chuckles] I think the world will be much better if we all believe in the power of music.

That’s where the harmony is.

Is it easier now for you to find musicians who can play ancient instruments than it was 30 or 40 years ago?

Yes. And after all those years of working in the world with this type of music, I know everywhere where there are good musicians. In the ’70s, it was very difficult to find good musicians; it was a very small group. But today, a lot of people are working with ancient instruments and music, from America to Japan to Australia.

There’s more study of it in colleges and conservatories?

Yes. But among the people who are studying, always it’s very few that can be, at the same time, great artists and great specialists in this. It’s the same thing in all professions: in jazz, in pop music, in classical.

Is the Internet also helpful in looking back in time?

Internet can be a help sometimes, when you have to compare musics. I’m now looking, for example, at the music of the Balkans, from Bulgaria and Romania and Greece and Turkey. And with the Internet, I can see different musicians playing on YouTube, see how they sing and how they play, and I can start a selection of people I’d really like to contact. But the real important things, you have to find yourself in the libraries, you have to go through the scores.

Is Berkeley a special place for your music? You keep coming back.

Yes. I remember when I discovered the library of the university, which has one of the most interesting libraries of music; you can find a lot of important books there. And it’s very important for its musicologists. Berkeley is an important music center, not just in classical, but in jazz and many other aspects.

When you were coming up in music, was it difficult in Spain under Franco?

Very difficult, because we were very engaged in protesting and making actions against Franco, especially in Catalonia [in northeastern Spain]. On my Spanish identity card, my name was written “Jorge,” but my name is really “Jordi,” which is Catalan.

What was Franco’s problem with your region?

Because in Catalonia were the principal political republican [i.e., anti-Fascist] forces. And also because Catalonia had been independent from Spain [as an autonomous nationality]. … They [the Fascists] canceled all the rights of Catalonians; it was difficult to speak Catalan. In 1968, we go away from Spain, because it was impossible to live in this situation and make a proper study, when people in the street are fighting against police.

Was Franco also against Catalonian music?

Yes, everything that represented the spirit of the culture. And it’s still today a bit like this.

And among your other interests, you’ve become an exponent of Catalonian music.

We’ve had a lot of recordings, but I also very much love Spanish music. I’m Catalan, but I feel at home in Sevilla or Toledo or Santiago de Compostela. Why we cannot be together in a country and respect our differences? I spent 25 years in Switzerland [he studied under August Wenzinger at the Schola Cantorum Basiliensis and succeeded him as professor of viola da gamba], where everybody feels Swiss, though there are Italian Swiss, German Swiss, French Swiss, and Romansh Swiss. In Spain, no, you have to be all Spanish!

And part of what fascinates me about the early music you’ve helped us reclaim is that it goes back, in Spain, to a time before the Inquisition, when you had something closer to the world of peace you advocate.

This is not “old” music. We have old scores, but music is always alive.

If those [pre-Inquisition] Catholic kings hadn’t had exposure to Jews and Muslims, the world today would be totally different. Also, in the Ottoman Empire [based in Turkey], Muslims, Christians, Orthodox, and Jewish people lived in all the cities, in peace. The problems started there in the 19th century, when nationalism was pushing here and there. I’m preparing a new project, about Armenian music, a very beautiful repertoire and not too well-known. I’d like people to remember the tragedy of the Armenian Genocide, and we’re making a recording as an homage to the victims.

When will that be out?

Please tell me more about the projects you’re bringing to Berkeley.

We call these programs “A Dialogue of Souls,” and it’s a dialogue of Ottoman, Andalusian, Jewish, and Christian music, from medieval Spain and around the Mediterranean. The two projects are very different. One is about the dialogue between Orient and Occident, with all these combinations of music coming from the [13th-century] Spanish Cantigas de Santa Maria, from the Christian side, from the troubadours, from the Istampittas [dances]. And this is in dialogue with the Sephardic, the Berber, the Muslim, in those ancient times.

Music is music. It’s equal, whether it’s old, new, jazz, Celtic, Sephardic, or Muslim. The importance is what we can do with it.

The second project is more specific, from Istanbul. It’s around one Moldavian prince, Dimitrie Cantemir [1673–1723], who was in Istanbul 20 years as a prisoner of the Ottomans, because his father was a king in what today is Romania. He was a great musician, invented a notation, and put together 500 pieces from the 17th century. And I have made a selection from what he called The Book of the Science of Music. We combined those with music that was made in Istanbul at this time: Christian music through the Armenians [200 years before the Genocide], Jewish music through the Sephardic musicians [200 years after the exodus from the Spanish Inquisition], and Muslim music through the Ottoman. Again, it’s a very beautiful dialogue.

The old music seems new because you’ve put it in contexts that surprise many of us.

Well, this is not “old” music. We have old scores, but music is always alive.

Will your daughter Arianna be coming to Berkeley to sing or play harp with you?

No, this time I have just my Greek musician playing santur [Persian hammered dulcimer] and guitar, and my percussionist. Today, it’s a crisis everywhere; we have to save money. [Chuckles]

And how is it, musically and in other ways, without Montserrat?

Well, I will say, Montserrat is still with me every day, through the music. At every concert, I talk about her, I play some music for her memory, and I’m working on different projects which Montserrat was preparing. In the house, everything is as Montserrat organized it. I had the privilege to live 45 years with such a person; she was my muse, the mother of my children, my passionate love. When I didn’t know what to do with something, she was always ready to help, always bringing her sweetness and compassion. She was like a sybil, coming from ancient times and living in our time, you know. I pay the price of this privilege, and I’m happy to pay this price.

We’re lucky to keep her with us on her recordings.

But I have to say, it’s not always easy. Sometimes, the most simple things, when you’re home and you make a little dinner, and you feel she’s not there to talk with you. When I do music and travel, it’s OK. But when I’m home, the warmth and the contact are not there. But I feel her spirit is helping me to go.

Montserrat was part of your family’s mission, and part of what’s unique about that mission is how impossible it is to classify it. Some of what you’ve all done is thought of as classical music, but fans of world music, like me, look to you as a champion, because we can hear so many different places in your performances and recordings.

Music is music. It’s equal, whether it’s old, new, jazz, Celtic, Sephardic, or Muslim. The importance is what we can do with it — the emotions, the spiritual dimensions we can bring. Music is what makes us human. If the world had more space for music, we would have more peace.