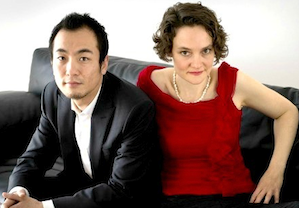 Change ‘Z’ to ‘2’ and ‘O’ to ‘0’ and you’ll start figuring out why Eva-Maria Zimmermann and Keisuke (pronounced ‘case-KAY’) Nakagoshi have combined their keyboard talents under a mysterious moniker. ZOFO stands for “20-Fingered Orchestra,” and the ZOFO Duet, recently nominated for a Grammy,  is unlike any four-hand piano team you’ve ever heard. When they met in San Francisco, the young pianists had already begun significant solo careers. Zimmermann trained at the Conservatory of Geneva in her native Switzerland, and went on to festivals worldwide, including the Other Minds Festival of New Music in San Francisco. A flexible and compatible collaborator, Zimmermann has appeared with the Orchestre de la Suisse Romande and other major orchestras, as well as in lieder recitals and with chamber ensembles, among them the Del Sol String Quartet. Nakagoshi began piano study at age 10 in his native Japan, and eight years later came to the San Francisco Conservatory, where he earned degrees in composition and chamber music. He represented the Conservatory at the Kennedy Center, and trained also with Emanuel Ax and Gilbert Kalish, before collaborating with a variety of soloists and chamber ensembles. Nakagoshi currently serves as pianist in residence at the Conservatory, while Zimmermann teaches at Yehudi Menuhin’s Nueva School in Hillsborough. The pair chatted with SFCV while in the process of preparing for their ZOFO performance next month with Old First Concerts. Zimmermann’s comments appear in regular font, Nakagoshi’s in italics.

You two started piano in your homelands, but you’re both Bay Area residents now. What brought you together in the ZOFO Duet?

Eva-Maria Zimmermann: It was about 3½ years ago. Keisuke injured his hand, and there were so many gigs he couldn’t do, so I was asked to replace him for some chamber music concerts. He turned pages for me, and [at one concert] I had to play this crazy piece by Julia Wolfe, where I had to play at the top of the piano, and cross my hands.

Keisuke Nakagoshi: And I was very impressed! I was turning pages and thinking, We have to read together, when my hand gets better. And we did, and we decided to keep going with it.

Was there any significant difference in your training, or your technique?

Eva’s technique is just incredible — likewise, Keisuke — and her body motion when she plays is just so natural. I’m more go-with-the-flow.

I’m really impressed with his technique! I admire him for his great sense of rhythm, his ability to have a lot of fun during a performance (and pull me along). And he is an incredible sight-reader and learns at the speed of light. It’s more our interpretation which is a little different. With Classical and Romantic pieces, I feel like I own that music, and I just want to teach Keisuke how to play it.

I always had this dream to play Stravinsky’s Rite of Spring, the four-hand piano version. Many people are used to the huge orchestra piece. But the piano version has more rhythmic integrity. It’s a challenge to make it work on one keyboard, not to bump into each other’s hands. It’s very choreographed.

So there was something different from traditional four-hand combos in the way you guys did it?

It’s a challenge to make [Rite of Spring for four hands] work on one keyboard, not to bump into each other’s hands. It’s very choreographed. – Eva-Maria Zimmermann

We sit on one bench, but a lot of times we have to choreograph our moves.

So you actually move around the bench? I grew up taking piano lessons from my mother, and if we were doing an arrangement of a Dvořák Slavonic Dance or a Beethoven symphony, Mom would be the Secondo [playing the lower piano keys] and I’d be the Primo [the upper keys], and she’d always be seated on my left. You guys are saying you’re not stuck on one side or the other?

We switch around, yes.

It’s a very intimate form of chamber music, and it’s very rare. I can’t think of any other instrument that does that. So one of the greatest things is that we can switch the parts.

And we can play the same piece in two different versions, which we have done a few times. I think it’s also really great not always to play just Primo or Secondo, because it’s very different for the ears.

I think it’s both.

For me, it’s very important to play Secondo a lot, because then my ears hear the composition more as a whole. When I’m on Primo, I really have to make an effort to hear it as a whole.

Keisuke, is it the same for you? What do you get from switching parts?

It changes things up, always keeps you fresh.

Does the music get shared evenly, or does someone sometimes take the lead?

It all depends. We mostly focus on rather modern music, and that’s more like chamber music, rather than when Primo was always the melody and Secondo the accompaniment.

Is that true of the Rite of Spring? Do you deliver that more faithfully than traditional stationary four-hand pianists?

At concerts we’ve given before, a lot of comments we got were that we sound like one creature playing one piano. – Keisuke Nakagoshi

I think so. And it’s one of the most acrobatic pieces we’ve been through. Our concert at Old First Church on Jan. 25th will be our first of premieres of commissioned pieces, and they’re nothing like traditional pieces; we’ll always be switching back and forth.

Our first commission ever is by Gabriela Lena Frank, called Sonata Serrana No. 1, which means she wants to continue writing for four hands. We just got the finished score yesterday, and we started practicing immediately.

What were your impressions?

I really liked it.

It’s a really fun piece; it has a lot of energy.

With what she creates, the piano almost sounds like a different instrument.

Another of the pieces [at Old First] is by Stefan Cwik, called Acrobats, and in that one, we actually do switch places while doing the piece. [The program will also feature compositions by Allen Shawn, Nicholas Pavkovic, and Nakagoshi himself.]

Did Gabriela actually engage you while she was composing?

She actually came to our first performance of Rite of Spring, three years ago, at the Conservatory.

And she took notes while we were playing. She already had ideas of what she wanted to do.

She was so excited about writing a piece for us.

Tell me more about how your four hands sound different to audiences.

That’s a very interesting question. At concerts we’ve given before, a lot of comments we got were that we sound like one creature playing one piano. And that’s the fruit of lots of rehearsals. At the same time, visually, it’s … I don’t want to use the word ‘entertaining,’ but it’s more fulfilling to experience.

Are you still learning from each other?

It’s very inspiring! We’ve been playing together for almost three years, and we can see how we’re affecting each other. We started off as very different pianists, but now we know how each other plays. I take a lot of good things about her playing into my playing. I don’t know whether she does that, but it’s really melting in.

Yes. And we should add that there’s a new CD [of ours] coming out in March, called Mosh Pit, on Sono Luminus [Records]. There’s gonna be the Gershwin Cuban Overture, Samuel Barber’s Souvenirs, John Corigliano’s Gazebo Dances, Allen Shawn’s Three Dance Portraits, Conlon Nancarrow’s Sonatina, and Paul Schoenfield’s suite, Five Days from the Life of a Manic Depressive. So it’s all dance-related.

Anyone try to dance to ZOFO’s music yet?

Oh, yes: my kids, all the time! And could you mention that we got nominated for a Grammy?

Best Chamber Performance. [The producers of the album, Victor and Marina Ledin, are nominated for a second Grammy.]

For Mind Melt; it was released this year, in April [also on Sono Luminus]. It has the Rite of Spring on it.

Congratulations! Will you two be doing a different kind of walk on the red carpet?

We do acrobatics only on the keyboard.