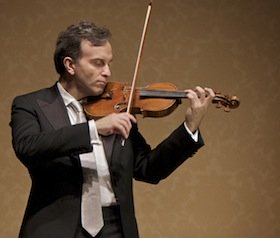 Gil Shaham played his debut concerts with the Jerusalem Symphony and the Israel Philharmonic (with Zubin Mehta) at the age of 10, and now at 40 he’s one of classical music’s most popular violinists — and with good reason. In the tradition of Jascha Heifetz and Itzhak Perlman, Shaham’s playing combines a sense of effortless technical facility with an aura of joyous enthusiasm.

An artist with dual nationalities, Shaham was born in Champaign-Urbana, Illinois, in 1971, then moved with his family to Israel at the age of 7. It was there that he began to study the violin, though at home he was surrounded by scientists; his father, Jacob, was an astrophysicist who hosted a weekly science program on Israeli television, while his mother, Meira, was a cytogeneticist.

Shaham’s list of recordings, prizes, and live performances is extensive. But now at the age of 40 he has trimmed back his concertizing schedule to accommodate his family life, which includes caring for his newly arrived third child, Simon. He and his wife, fellow violinist Adel Anthony, live in New York. And it was there that I spoke with Shaham about his life and the state of his art.

You turned 40 this year. How did it feel?

You know, I really didn’t feel like celebrating. I slept in that day. Then in the afternoon I took a long nap. Truthfully, I was happy to get to the next day.

Turning 40 is one of those birthdays when you tend to reflect on where you are. Did you do any personal reflecting on arriving at 40 and what it meant?

Yeah. I started questioning all my rubatos [stolen time in music]. It’s true.

In relation to that, you debuted as a violinist at the age of 10, which means you’ve been playing professionally now for 30 years. That’s a lot of notes. How are you physically?

I think we are lucky as violinists. Pianists and wind players have to be very careful not to play too much. Conductors develop a lot of shoulder and back problems. Very few athletes or dancers continue as long as we do. I feel very lucky to be a middle-age violinist. Or should I say, an “aging” violinist.

Most people don’t tend to think of musicians as athletes. But physical strength, flexibility, and stamina are critical.

Absolutely. Things have definitely changed since I was a teenager or in my early 20s. I need a good hour to warm up now before I feel comfortable to go on stage. I don’t remember that being true when I was younger. [Laughs] Maybe I just had lower standards.

I feel very lucky to be a middle-age violinist.

Do you do much conditioning?

When I was young I never did anything except playing. Then I started kind of running and jogging. Now I try to do that as often as I can, even if it’s just to walk the two-mile walk to drop my daughter off at school. But when I don’t manage to get in that kind of exercise I definitely feel it.

How old are your children?

We have a 9-year-old son, Elijah; a 6-year-old daughter, Ella Mei; and a month-old boy, Simon, who is leaning on me right now.

I’ve cut back a lot. I used to play over 200 dates a year. But after Elijah was born, for 10 years now, I’ve had this magic number of 50 in mind. So I try to keep it to 50 concerts a year. And I stay as much as I can around New York. I’m hoping, for my trip to the Bay Area in November, that Elijah will come with me — just the two of us.

Are your children musical?

It’s a little bit scary because they are. They love music, and Ellijah and Ella both wanted to start taking violin lessons. So we have this wonderful teacher who comes to the house.

As opposed to the ones that already live there?

It’s true we are both violinists. But we talked about this and decided we were not going to teach them ourselves or say anything. It’s between them and their teacher. I don’t think I’d be a very good teacher for my own children. It’s very difficult.

I can’t think of any music that provides the same pleasure [as Bach pieces], even when I am playing them alone in my room. ... It’s mesmerizing. It’s also cathartic and uplifting.

For your upcoming recital you’ve decided to play a program of Bach pieces for solo violin, which is certainly a challenging choice. What made you decide to put together this program?

I’ve been playing these pieces all my life, but I was always worried about going on stage with them. I decided if I don’t start playing them now in public, it’s not going to feel more comfortable. But now that I am playing them I’m finding it a real joy. I can’t think of any music that provides the same pleasure, even when I am playing them alone in my room. If I set aside an hour to practice Bach, it invariably becomes two hours or three hours. I never feel like I’ve spent enough time with these pieces. It’s almost like a form of meditation. It’s mesmerizing. It’s also cathartic and uplifting.

Any thoughts on where you would like to be when you turn 50?

I hope I can still be doing the same things.