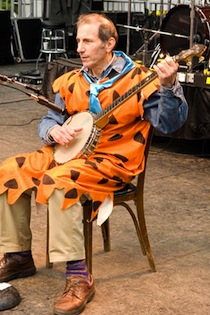 After a long walk in the wee hours of every workday morning, 77-year-old Warren Hellman returns to his home near the Presidio and practices bluegrass-style banjo in a small upstairs room where he won’t disturb his sleeping spouse, Christina. At the other end of a day spent managing many millions of dollars from the headquarters of Hellman & Friedman at One Maritime Plaza, he' assays another session with the banjo. But this coming Friday morning, Hellman will be headed for Speedway Meadows in Golden Gate Park, for the opening of the 11th annual three-day, free-of-charge Hardly Strictly Bluegrass Festival, which he founded and also finances. And on Saturday morning, he and his instrument will be up on one of the festival’s six stages, performing with his regular group, The Wronglers, and Jimmie Dale Gilmore, the renegade country-and-western music legend with whom they recorded the charming Heirloom Music, released earlier this year on the Neanderthal Records label.

Begun on a much smaller scale at the turn of the millennium, shortly after Hellman had reestablished his San Francisco residence and his lifelong flirtation with bluegrass music, the festival now attracts over three-quarters of a million fans and nearly a hundred acts, star-studded and little-known, showcasing not only a variety of bluegrass forms but also C&W, Old Timey, New Orleans, blues, rock, and even North Indian classical genres. Hellman sat down with SFCV in his office, 12 floors above the Financial District, to talk about how he manages money and music.

This year, the festival’s tributee is one of your past participants, Hazel Dickens, who passed away last April. There’s a tale that after her career of writing and singing songs about the evils of big business, she was surprised to be working with you. How did you find out about each other?

One of the guys in the Firefighters Union told me, “I think you’ll like this kind of music, listen to this,” and it was Hazel and Alice [Gerard, wife of “new grass” musician Mike Seeger]. The first song on the album was Maddington Mine [about a mining disaster in West Virginia], and I was just besotted. So I called her, and she and [country star] Emmylou Harris became the kind of heart-and-soul inspiration for the festival. One time, when Hazel was onstage, she said, “If Warren goes on being so nice, I may have to change my thinking about those kind of people.” [He chuckles.] My wife helped with Hazel a lot, because [Christina’s] father was one of the leaders of the Communist Party in England. I think Hazel felt better about me because I was married to the daughter of a communist. [Laughs]

The fun of it is the diversity and the surprises, that you hear music you’ve never heard before.

And there are ways you’ve made use of bluegrass as a multimillionaire.

My cousin Frances Dinkelspiel wrote a book called Towers of Gold. [Subtitled How One Jewish Immigrant Named Isaias Hellman Created California, the biography, published by St. Martin’s Press in 2008, showcases the author’s and Hellman’s great-grandfather Isaias Warren Hellman, a German-Jewish immigrant who financed the development of Los Angeles and became the president or director of 17 West Coast banks.] It’s a terrific book, albeit she’s my cousin, and she asked if I could write a song about him. I introduced the song at some book-signing or something, and it kind of stuck, so we may do it at the festival. It goes [and he sings]: “O, Isaias, you were the father of the clan/O, Isaias, you mined gold without a pan/O, Isaias, to opportunity you ran/O, Isaias, you were a mighty man.” (I do better if I have an instrument.)

I understand you started banjo while you were starting your career in high finance, back East. 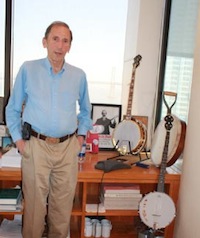 Like everybody who wants to learn to play old-time banjo, and to learn frailing [that is, picking the drone string], I bought Pete Seeger’s book [How to Play the 5-String Banjo]. I started trying to call Pete Seeger, and finally some guy called me back and said, “I’m Mr. Seeger’s manager, what do you want?” I said, “I’m Warren Hellman, I’m at Lehman Brothers. [He giggles.] I’d like to take banjo lessons from Pete Seeger.” The guy says, “Well, that’s not gonna happen.” Why would he give banjo lessons to some capitalist from Lehman Brothers?

Having interviewed and met Pete, I’d imagine he would have taught you; he’s a generous man. Was there any bluegrass in your family background?

No. My mother [Ruth Koshland] loved classical music, and I’m told she could have been a classical pianist. She and my father [Marco Hellman] were involved in the “proper” things, like the San Francisco Symphony and the Opera. But it never resonated with me at all. Listening to [West Indies folksong] The Sloop John B as opposed to listening to La traviata, I guess I can understand why people would prefer the latter, but not me.

When I was a kid, I’d stay home from school and read librettos while I listened to opera, so I think we can say that opera is also a lyrical music.

What is it that brings people back to the festival, and brings more and more of them in over time?

What I’m doing right is that all the people who were involved from the beginning, including Dawn [Holliday] and Sherri [Sternberg; the two help book and set up the event], have remained involved. We have a great crew; they’ve managed their way through a variety of problems.

Has the diversity of bookings come more from Dawn [who also books Slim’s and the Great American Music Hall] or from you?

I think it’s a combination. The fun of it is the diversity and the surprises, that you hear music you’ve never heard before. [Dawn] has a remarkable ability to spot people before they’ve made it. But I have the ability to spot the unusual. Maybe because the songs I write are so bizarre, I’m attracted to the bizarre and the unusual.

Yes, which you have also, by the way.

If you can pick great people to be in business with, they’ll figure out a way to make it successful.

Bless your heart. And what attracts the kinds of performers who’ll be coming this year, including celebrities like Chris Isaak, Kris Kristofferson, Merle Haggard, and Emmylou Harris?

A couple of things. First, we don’t stint on what we’re paying ’em. Second, it becomes like a family party. We like the artists to come in, spend the weekend, and meet each other, and there’s a tremendous amount of people sitting in on other people’s sets. They look at this as sort of a huge weekend party where they get together with people they rarely see, and hang out.

It sounds like there’s much more of that than there would be, say, at the Monterey Jazz Festival, where performers are more likely to be booked, come in, perform, and get out. It’s more like [country star] Willie Nelson’s annual barbecue.

That’s what we want it to be. And most people stay right through the weekend.

I’d imagine you’re learning a lot from them about music in general and the banjo in particular.

Oh god, I have so much still to learn. First, I’m a 77-year-old, so I don’t think I’m gonna get quicker (though I hope I will). Somebody gave me a recording of [bluegrass pioneer songwriter and banjoist] Ralph Stanley doing Little Birdie, and it’s just hopeless, I could never play that fast. [Stanley, now 84, will appear on Sunday with his Clinch Mountain Boys band.]

But are there techniques you’re picking up?

Do you play banjo?

Maybe it’s the same, and please don’t think I know more than I do, but your left hand is so intricate — you gotta get the correct notes and stuff — that most people, including me, forget about their right [plucking and strumming] hand. What I gotta do now is, stop learning individual tunes and teach my right hand to do the stuff I thought I knew but didn’t. I’m not bad at “drop thumb,” but I am bad at keeping my thumb on the fifth string and keeping that string resonating.

Where our firm [Hellman & Friedman] has done well is something I don’t agree with [Warren] Buffett about — not that I’m entitled to disagree, since he’s the second richest man since Croesus, and we’re friends. But I’ve always said, if you can pick great people to be in business with, they’ll figure out a way to make it successful. And we’ve done that over the years. Almost all the businesses we own have a very high human content. We owned, at one point, Young & Rubicam, the advertising agency, and if there’s ever a business that has a lot to do with creative thinking, it would be that. We’ve owned a bunch of money management companies, which prosper or fail based on people. But we’ve never owned an airline, because the costs are so much equipment, and the human content isn’t where you spend your money with airlines.

Is the festival anything like your idea of a good investment?

Maybe it’s throwing caution to the wind, but it’s a choice of where you want to use your money, and to me, the striking difference is looking at hundreds of thousands of people enjoying themselves in the sun, smoking something they’re not supposed to, not getting in fights, and not buying Picassos. One time Christina and I bought a couple of [painter Edward] Hoppers — and I never look at ’em! My wife is a terrific painter, so I look at her art, it’s great, and I didn’t pay nothin’ for it.

Well, I just might do that, because you're just too much fun.