When one thinks of guitar heroes, the names of Clapton, Hendrix, and Townshend might come to mind. And when it comes to guitar quartets, the Los Angeles Guitar Quartet (LAGQ) are guitar heroes in their own right, having won a best Classical-Crossover Grammy Award for its Guitar Heroes album in 2004. Cofounded in 1980 by William Kanengiser, John Dearman, Scott Tennant, and Matthew Greif (who replaced original member Andrew York in 2006), LAGQ, having toured throughout Asia, Europe, and North America and recorded more than a dozen CDs, has never met a style of music it doesn’t like — or cannot play.

Indeed, Kanengiser, who won first prize in the 1987 Concert Artists Guild International Competition as well as major guitar competitions in Toronto and Paris, has also recorded four solo CDs in numerous styles, including jazz and Caribbean. A member of the guitar faculty at the USC Thornton School of Music since 1983, Kanengiser, 60, also does many of the quartet’s arrangements, which will be heard Nov. 23 at Herbst Theatre, presented by the Omni Foundation and San Francisco Performances. I spoke with Kanengiser by phone about a number of topics, including the group’s upcoming gig — a tribute to guitar heroes, including Jimi Hendrix, Frank Zappa, and Pat Metheny.

What makes the guitar so universally beloved and why was it your instrument of choice?

I chose it because it’s the coolest instrument there is. I started playing it when I was 9 because of some of the music I heard — the Beatles, James Taylor, Joni Mitchell, and rock ’n’ roll in general. I started out doing all different styles and mostly played with nylon strings. Then in high school I played electric guitar, too, but I played with my fingers and not with a pick, in a sort of classical technique.

When I went to USC, I focused on classical guitar and a little jazz, but then got a bachelor’s and master’s degree in classical, and [in LAGQ), we’re all trained classical guitarists — whatever that means. But for me the sort of irony, full circle journey, is that in the quartet I’m now playing music that I was in love with when I was in high school.

[As for] the guitar being a sort of universal instrument, it’s that almost every musical culture has a plucked string family of instruments, and over the years we’ve done world music projects — South American, African, Indonesian, Japanese, Russian. The guitar crosses geographic musical styles very well. It’s also the ultimate sort of pop instrument because it’s fundamental to pop, folk and rock and roll, of course.

One of the things we’ve tried to do by using our classical training and our ability to change the sound that comes out of our guitars by modulating the way we play, is that we can hopefully evoke a real rock, a real blue grass, a real jazz sound, with nylon strings. I think all four of us are fascinated with the sound quality we produce. I also think some people have the idea that the guitar is a monochromatic instrument — that it’s just strumming or plucking — but the guitar has one of the widest color palettes of any instrument. There are really sweet, dulcet tones, bright tones and we can use it as a percussion instrument by hitting it in various places to sound like all kinds of drums and castanets.

Let’s talk about your upcoming program, which also includes arrangements of works by Chet Atkins and Ralph Towner. How do you decide on a program? Is there a theme — does everyone have a particular piece that they’d like to perform?

This program is really quite a departure for us. Over our history we’ve always had a kind of stylistic and period diversity to our repertory. We might play a more contemporary piece, then a Bach Brandenburg Concerto and a piece by Stravinsky. This is one of the first times we’ve done this theme of American guitar masters. We’ve wanted to highlight this very specific idea and hopefully have a lot of diversity and style and mood and character within that theme.

In a sense, it’s us paying tribute to American guitar heroes of ours. We all were excited to put this program together and the major work that’s being featured is a piece by Pat Metheny, Road to the Sun, which we premiered about two years ago. It’s one of the most important works that’s ever been written for us.

We had a collaborative project with Pat and he wrote this piece that was only supposed to be 10 -12 minutes long, but he got into it and it became symphonic in scale. It’s a 25-minute work with six movements and it expresses every possible kind of emotion. There’s tenderness, a funky groove, depression, exultation. It’s really something. For us to have Pat write it for us and work directly with us, it’s such an honor, and when we got the score, he wrote each part for us as individuals. Since we wanted to build the rest of the program around Pat’s piece, that’s when we came up with this idea to pay tribute to guitarists that have inspired us over the years.

The group will also be playing your arrangement of Ralph Towner’s “Icarus.”

It’s one of his most popular pieces. It’s almost like a folk-rock anthem and it’s a beautiful, tuneful piece that was originally scored for guitar ensemble with cello. I decided to arrange it in quasi-Brazilian style. I kept the melody and harmonic structure, but it’s like a samba. The idea is I quoted a little tune, “Quiet Night of Quiet Stars,” from the film Black Orpheus, that was scored by Luis Bonfá. It’s an example of an arrangement that doesn’t try to do a completely faithful reproduction but takes it as a springboard to go in another direction. The three of us vamp on chords and Matt improvises a solo, so it represents that other side of us [where] we’re not only playing the notes that are written down on the page.

What about Hendrix — will audiences hear LAGQ play “Purple Haze”?

No! But the Hendrix piece is a brand new arrangement of “The Wind Cries Mary” by Matt, and it’s beautiful. It starts out with this gentle, quasi-minimal groove, and the tune starts emerging, and in the middle it’s got all kinds of heavy bass ostinato, the twangy Hendrix licks, and then reverts back to that minimal opening. It’s sort of like this breeze flows into this onstage and becomes Hendrix, then flows off again.

That’s so cool, but it does beg the questions, why didn’t you just go the rock route originally?

I always thought of myself as being a multifaceted guitarist and my hero in high school was a guy named Steve Howe, the guitarist from the group Yes. He could do anything. He could play straight jazz, he could rock out and do extended contemporary stuff [as well as] classical and flamenco. And I wanted to do all of it, too.

That’s part of the reason I came to USC. They offered classical and popular guitar, so when I got here and met [classical guitarist] Pepe Romero, I realized that this is my calling — to become a classical guitarist. I spent years really refining that — working out the difficulties of sound and technique on the guitar — but I always loved the other styles, too. The idea that my interest in those other styles never went away and I was able to use the technique that I acquired to represent those things that make me feel at heart that I’m able to be a rock and roll player or jazz player — but I just do it on a nylon string classical guitar.

You might say that Pepe Romero is also one of your guitar heroes. Are you still in touch with him?

I am in touch with Pepe. He comes four times a year to USC as an artist in residence in the guitar program. We’re very, very close friends. He’s always been such an incredible role model for us and the whole reason we have a guitar quartet is following the model of Pepe’s family group — the Romeros. He still tours the world and he’s a phenomenal teacher. The glib thing is that we all had to take a class called guitar ensemble — and because of Pepe and our other professor, James Smith — we’re still together after 39 years. 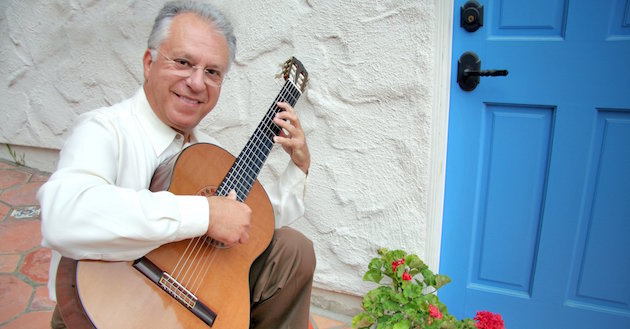 That almost seems unfathomable — that a group can stay together that long — especially these days when everything seems to move so quickly and is all about trending. What’s your secret?

Scott, John, and I are original members and Matt’s the new guy. He’s been with us for 13 years. We’ve gone through a lot together, but the musical relationship onstage, there really is no substitute for having that much time working together. Now we’re able to be really quite free and improvisatory in a way and are able to pick up subtle, almost telepathic cues from each other, because we’ve done it so long.

And yes, we have disagreements — like brothers in a family. We have our sorts of roles. One person’s like the devil’s advocate, one’s the control freak, but maybe the amazing thing is we’ve been able to navigate the pressures, relationships, and all the decisions, and we still play together, we hang out, and we’re still friends. Part of it is that, ultimately, we do try to treat each other with respect. That’s the most important thing. We might disagree about a piece in a way we want to play it — how someone is playing this or that — but we try to keep it civil and respectful.

You’re very involved with the idea of musicians’ health issues and cofounded the Thornton Health and Wellness Committee in 2011 and are now its chair. What’s that about?

We’re doing everything from setting up screenings for hearing protection to muscular/skeletal issues, as well as doing a lot of work with mental and emotional health issues for students — dealing with performance anxiety, nutrition, exercise — all of these kinds of things. I developed a course in musicians’ health and wellness and along the way I’ve learned so much but have also reached out to colleagues of mine in the medical communities — physical and occupational therapists, psychologists. It’s broadened my connections and horizons and it’s something I’m very passionate about.

One of the areas I’ve also been very interested in is the ergonomics of playing — repetitive strain injury, tendonitis. I’ve studied quite a bit of the Alexander Technique [an educational process created to retrain habitual patterns of movement and posture], which dancers and actors also practice, and that’s a major way to avoid these kinds of issues. It also relates to your emotional state by avoiding chronic tension — emotional tension that creates physical tension.

I feel like it’s pretty ironic that people who listen to music find it so relaxing and enjoyable, while people making it are tying themselves into knots. Pepe [Romero] is not just an amazing guitarist, but he’s a guru of the guitar. He’s also a deep spiritual person, and one of things he talks to students about is feeling the joy of playing and loving playing and not judging yourself and to stop being so self-critical and experience it. It’s so different when you’re learning because we try very hard to not mess up, and that’s a fear-based way of playing. Pepe says there’s no room for fear when you’re playing — you have to be filled with love.