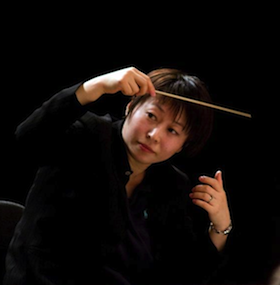 It’s been nearly 20 years since Xian Zhang made her professional conducting debut with a production of Le nozze di Figaro in her native China. Since then, she’s cut a wide swath across Europe and North America; she was the first woman to conduct the Staatskapelle Dresden in its main hall, and she has been a guest conductor with the London Symphony, Royal Concertgebouw, English National Opera, Los Angeles Philharmonic, and the Chicago, Houston, and National Symphonies. From 2002 to 2008, she held various posts with the New York Philharmonic, eventually becoming the organization’s associate conductor and first holder of the Arturo Toscanini Chair. Xian Zhang currently serves as music director of the Orchestra Sinfonica di Milano Giuseppe Verdi and has been artistic director of the NJO: Dutch Orchestra and Ensemble Academy since 2011. Based in Milan, where she lives with her husband and two sons, she makes her San Francisco debut this month, leading the Merola Opera Program in performances of the Mozart opera she still loves best, Le nozze di Figaro. She spoke with SFCV last month during a rehearsal break.

Welcome to San Francisco. What are your first impressions of the Merola program?

It’s a fantastic setting for training young singers. It really fosters them to become professionals. It’s very special. The program has top coaches. For singers, the academic programs maybe don’t help them as much as a really good program like this one — they have language coaches, voice coaches, conductors, this constant process of doing opera. It’s a whole new area from the conservatory, which is important, too. But if you really want to start a career at a very high level, this is what you need.

How are the rehearsals going?

Right now we’ve had a week of rehearsals, and 10 days of staging rehearsals. I’m surprised by the level of the talent, and also how young they are — 21, 22 years old. Our Susanna and the Countess, both of them are only 23 years old! To be able to sing at the level they are singing is astonishing; they’re very well-prepared. And the venue is beautiful. The acoustics are really good. It’s an intimate setting, which is ideal for Figaro.

What kind of advice are you giving the singers?

To be able to sing at the level they are singing in the Merola Program is astonishing; they’re very well-prepared.

They really have to know what the text means. The stage director, Robin Guarino, and myself, we agree on this. You have to come out of the text organically, understand the text, and try to express and project the text. Coming from that, you cannot go wrong. If they don’t understand that, that’s where we can help them. Robin will help them with staging, but my job is to help them musically — to really have the words and the music so that, vocally, everything works. These singers are so fresh, the instruments they have are wonderful. Now, early on in their career, I can sometimes tell them how best to use their instruments, to maybe hint how they might use them in a better way, what the options are for them.

This is an opera that’s very close to your heart, isn’t it?

Yes, it’s literally the first opera I ever conducted in public. That happened in China, when I was 20 years old. That was premature — I was really way too young to do it. But it’s funny — this opera has tended to come back to me every few years since then. The more I do it, the more I discover something new. That’s the sure sign of a masterwork, that it speaks to you in a different way at different stages of your life, your career, and your musicianship. As a musician, there are certain works that you get attached to. For me, this is one of them.

What does a great performance of this work require?

For Mozart in general, and this work in particular, it needs to be witty. It needs to have a very clarified texture. It needs to be light and expressive. The genius in the music is that Mozart has written so little, but it means so much, and he did it with exact, perfect timing. We need to make sure that shows, and it shines, in the performance.

The sure sign of a masterwork is that it speaks to you in a different way at different stages of your life, your career, and your musicianship.

Do you have favorite recordings, or performances, of this opera?

For Mozart, I like [Carlo Maria] Giulini very much. He’s one of my very early idols in conductors. I find his interpretation very expressive, but not overly so. His is a very balanced interpretation.

Who were some of the other conductors who influenced you or were mentors for you?

As a mentor, I was very fortunate to work closely with Maestro Lorin Maazel. He influenced me a lot, in terms of the philosophy of conducting and running a rehearsal: how he thinks, and how he structures the work method with the group, or opera, or whatever. He gave me sort of a mental scope of how to structure things, and I’ve found that hugely useful for the past 10 years in my career. Managing time facilitates music-making — if I plan the rehearsal well, I can get ahead. Also, philosophically, what a conductor does on a mental level. Maestro Maazel does not believe that conducting is teachable — one’s movement or body language — and I agree with that. He believes that if a conductor really knows the score in his or her mind, the body will pick up and do what’s needed to communicate. It’s an abstract philosophy, but I agree with it.

Your parents were both musicians. How did that influence you?

I think that’s how my life took shape. They just decided very early on, maybe before I was born, that they wanted their child to be musical. I started piano when I was 3 years old. I wasn’t even able to reach the keyboard yet; I was just sitting on my mother’s lap. She would hold me and teach me how to play. In a way, I think it was good. I liked it. I never thought it was too much for me. I just went on with these tasks, all my life. From what they said, I would get very excited when people came to hear me play. I was really a show-off! After 11, I changed. I learned about pressure. But when I was very young I was excited.

The genius in the Figaro music is that Mozart has written so little, but it means so much, and he did it with exact, perfect timing. We need to make sure that shows and it shines.

I read that you were sort of an accidental conductor.

I was a pianist, then I changed to conducting. I was playing for opera singers. I learned conducting, but it wasn’t my plan. I met a teacher and she offered to teach me for a very short time. Then I went to conservatory. It all happened by a step that wasn’t planned, and then it really snowballed.

It certainly has! In this country you’ve already achieved a great deal, including your work at the New York Philharmonic.

Yes. I was at the New York Philharmonic from 2002 to 2008. In the beginning, I was a cover [standby] conductor. Then they offered me assistant conductor and then associate conductor. Between 2008 and 2009 I had my first son, and I moved to Milan to start my work there.

This fall, you’ll be taking your Milan orchestra to the BBC Proms. What will you conduct?

I’m going to conduct Verdi arias because it’s the Verdi anniversary, with tenor Joseph Calleja, and then a Tchaikovsky symphony. That’s the start of our season.

You know, I’ve been fortunate that when I really was challenged, it was of course very stressful, it made me very anxious, but I had to find a way to come through. There is tremendous pressure because of this — I know orchestras that have never been conducted by a woman, like the Vienna Sinfonica. Even when I went to the Concertgebouw, that’s really kind of a rare thing for that orchestra, as well. But I think it’s always music that helps me come through.

The woman who wants to do this must be a lot better than the males doing the same kind of job, really to be very, very good, to be able to compete and survive.

That does not mean there is no double standard. The double standard exists everywhere, not just in music. Maybe not so much for performers — pianists, violinists, or singers: Those, people accept as normal. For composers, conductors, directors, it’s another criterion. This means that the woman who wants to do this must be a lot better than the males doing the same kind of job, really to be very, very good, to be able to compete and survive. In a way, that’s really not fair. We’re doing the same thing, but we must give more and be better prepared to be accepted. That makes it harder, more intimidating, and there are already very few women who are doing this.

How do you deal with that?

When I was in Holland, a journalist asked me, “How do you feel as a woman, compared to a male conductor?” And I said, “I’ve never been a man, I don’t know! I only know how I feel as a woman.” So it’s a hard profession, and I’m trying my best as a musician to fulfill my role and do it well. I think time will change this; in 20 to 30 years it won’t be as much of a phenomenon. Twenty years ago, there weren’t so many woman executives. It just needs time, and brave women who are talented and who want to try. One has to be talented, courageous, a very good musician to start, and you have to be comfortable in front of people. I’m not comfortable in front of people in private life. But in rehearsals, in performance, I think I’m more comfortable than in normal life.