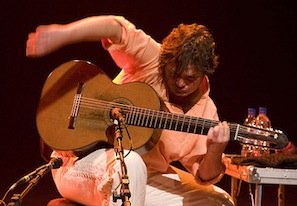 Yamandu Costa does not consider himself a classical guitarist, yet he gets plenty of invitations from classical societies and festivals, as well as from a number of classical conductors, particularly Kurt Masur. I came across Costa during a journalist’s tour of Brazil, in 2002, where he was being showcased by the Visa credit card folks as winner of their annual MPB (Brazilian Popular Music) prize for instrumental performance. Since then, the 32-year-old native of Brazil’s southern state of Rio Grande do Sul has toured the world and recorded 10 albums and DVDs. He’s featured at the end of this month in the Omni Foundation’s Dynamite Guitar series, at Marines Memorial Theatre. For this exchange with SFCV, his first-ever interview in somewhat idiosyncratic English (and a first-ever for me using Skype), from his home in Rio de Janeiro, Costa had linguistic support from visiting Canadian luthier Will Hamm.

Before I get to Yamandu, tell me how you two met up, Will.

Will Hamm: Yamandu was playing a concert in December with the Calgary [Alberta] Philharmonic Orchestra, with Hamilton de Holanda from Rio, an awesome mandolin player. I’m a member of the Brazilian Association of Alberta, and I’ve come to Brazil many times to visit friends and do work down here, so I decided to show up with some instruments. Yamandu fell in love with my guitar, and commissioned an instrument from me. I kind of pulled a dirty trick on him: I brought two guitars down here for him to choose from, and he chose both. [Chuckles]

Yamandu Costa: I asked Will to make the guitar in my way, with details about the sound and everything else. And it’s the best guitar I played ever in my life.

Will, what’s special about these instruments? Are they the seven-stringed, as Yamandu has favored, instead of the standard six?

WH: Both are [seven-stringed]. Also, the scale is a bit longer than usual, with more tension, because he likes to have a nice “snap” to the strings, and the headstock is little higher on the treble side, to get more tension there. There’s also a sound port on the side, and a special type of neck joint, which makes it easier to adjust later on. Because Yamandu travels to many countries that are humid or dry, sometimes he needs to adjust the height of the strings from the fretboard, and my construction method makes it easier to do that.

Are seven-stringed guitars a tradition in Brazil?

YC: Yes, but a newer tradition. This kind of instrument arrived in Brazil with the Russian gypsies, and players of choro [an urban blues form with Iberian modes and African syncopation] thought, “Why don’t I use this instrument to make my counterpoints?” Then one guy, José da Silva, became known as Dino Sete Cordas [Dino of the seven strings], and he was like [French Gypsy guitarist] Django [Reinhardt]: He created something so original [with the adopted instrument].

How do you tune that low seventh string?

Aside from the seven-string, you have a sound distinct from many other Brazilian guitarists. How did that develop in your family and your native region?

My style is more like popular music; I don’t have the classical formation. My mother was a singer and my father played the guitar, too, and the trumpet. He had a band, Os Fronteiriços, which meant, “The Border Guys.” My state [Rio Grande do Sul] makes a border with Argentina and Uruguay, and I listened much to their folk music, like chamamé, chacarera, tangos, and milonga, and from these, I put the rhythmic influences in my style. It’s a gaucho culture, Brazilian and Argentinean cowboys, with their yerba mate tea. My father made two or three long-plays [LPs] in Argentina, and had many friends there. And my first teacher was an Argentine player, called Lúcio Yanel.

Did he use slaps and snaps in his technique, like you do?

He was more lyrical, with vibrato, like a singer. But it was strong, the Spanish influence. A lot of Brazilian guitar is more soft.

And my intention is to show the world that Brazilians don’t just have bossa nova music.

Some people put you in the MPB category, which had more to do with the northern cities and states, like Rio and Bahia. When did you start picking up on that other music?

At 14 years [of age], I met with Baden Powell [de Aquinho, considered a virtuoso guitarist in the relaxed bossa nova style, which won the favor of American jazz musicians and international popularity in the 1960s and ’70s]. It was in Porto Alegre [largest city in Costa’s native state], and it changed my life, because I began to learn about choro, samba, forro, and the rhythms of the North.

And now you can play all those things!

Yes. I am what I like. And my intention is to show the world that Brazilians don’t just have bossa nova music.

And you’ve talked about the “music of a unified Latin America.”

This is my vision. Here in Latin America, I have a very big problem, because Brazil doesn’t know nothing about Argentinean music. I have to show the Brazilian people that there’s a very beautiful culture, very close.

The silence with an orchestra, when you make your cadenza, is the biggest silence in the world. And I love it so much.

You’re also reaching out to the West and the North, beyond Brazil?

Your earlier album Yamandu, which I was given a copy of in Brazil, starts out with your take on a piece by Ernesto Nazareth, a Brazilian composer from the early 20th century. When you use someone else’s composition instead of your own, do you always improvise?

Totalmente! It’s the natural way. I know the harmonies; this is my difference, coming from the popular school, and I know the harmony is very easy to make improvisations on. And I joke with the rhythms; it’s spontaneous. I listened to Nazareth when I was 4 years old; my father played it to me. To me, Nazareth is like Scott Joplin for you.

Before you get out here to us on this tour, you’ll be performing for the Classical Guitar Society of New York. When you’re in classical company, do you do anything differently?

I don’t change anything, and this is the second time I’ll play in New York; the first was with the Assad brothers, classical guitarists. My truth is why they invite me.

Do classical players learn from you?

Yes, and I learn, too. I once met a classical guitar–playing Frenchwoman, and I learned so much about the sound, the accompaniment. And she learned, “Don’t have a fright with the guitar, relax a bit.” But I don’t have the courage to play Rodrigo or Villa-Lobos, because I respect the classical school.

On your latest album, Mafúa (Biscoito Fino), you have an original song titled Bachbaridade. Does it have anything to do with Bach?

It’s a joke, a wordplay. “Que barbaridade!” is an interjection in my state [meaning, “What a riot!”].

There’s a YouTube video of you doing that song with classical conductor Kurt Masur, with whom you’ve appeared in several countries. What do you like about each other?

I think it’s the naturality. It’s an affectionate relationship. I met him in São Paulo when I was 22, I played for him on his birthday, and he loved it.

How does it feel to be performing with a big orchestra?

It’s another world. The silence with an orchestra, when you make your cadenza, is the biggest silence in the world. And I love it so much.

Does your being up there [onstage] help relax the classical players?

Yes, I think so. I don’t want to be pretentious, but I think this mix of two schools is the better way, and it’s the future. My son will be able to make an improvisation into a lecture, and will play Bach and will also play Django. This is my dream, because everything is beautiful.