Nothingset Ensemble, a grassroots collective of Bay Area musicians, composers, and conductors dedicated to performing new music, has just three prerequisites for selecting repertoire: The music must be less than 100 years old, should be performed infrequently, and must be great, according to Ted Hine and Darren Jones, the ensemble’s founders and creative directors. 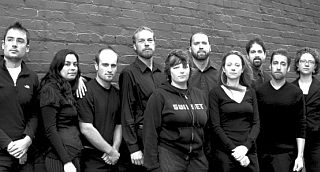 Casting such a wide musical net frequently calls for unusual instrumentation and can create a rare listening experience. “We strive to play great, new music that our audiences haven’t heard before,” said Hine. “And that will catch the ear.”

In keeping with this ambitious charter, Nothingset's eclectic program presented by Old First Concerts on June 28 at 4 p.m. includes works by Piazzolla, Stravinsky, Bay Area composer Steve Adams, Jacques Desjardins, Louis Andriessen, and the premiere of a David Garner piece that was commissioned by the ensemble. For those of you keeping track, that means Nothingset will perform works by four living composers, three of whom are expected to be in attendance at the Old First Church.

This season Nothingset is focusing on works influenced by jazz and rock, many featuring saxophone, electric guitar, marimba, violin, and clarinet. Hine and Jones solicit repertoire recommendations from all quarters, including the ensemble’s performers.

“There are so many great musicians in San Francisco looking for great music to play for audiences,” said Jones. “We find that if the musicians are gung-ho about the rep, it really provides a spark and the enthusiasm that makes for a great performance.”

The ensemble performs with several core members, but also includes a revolving set of players depending on the repertoire. Both Hine and Jones are graduates of the San Francisco Conservatory of Music, so their network keeps them in touch with a wide variety of musical colleagues in the area.

The premiere of David Garner’s Azure Morph “investigates a change in tonal color,” writes the composer in the program notes. The piece will be conducted by Jacques Desjardins, and features an E-flat clarinet, B-flat clarinet, bass clarinet, trumpet, electric guitar, electric bass, marimba, and drums.

Steve Adams’ Owed t’Don is dedicated to Don Van Vliet — better known as Captain Beefheart, the composer, performer, visual artist, and poet. The piece uses the marimba and violin in the “rock” context, according to the composer.

Miroirs Déformants, by Canadian composer Jacques Desjardins, is intended to be a “voyage through non-linear time and space” with clarinet, piano, and cello.