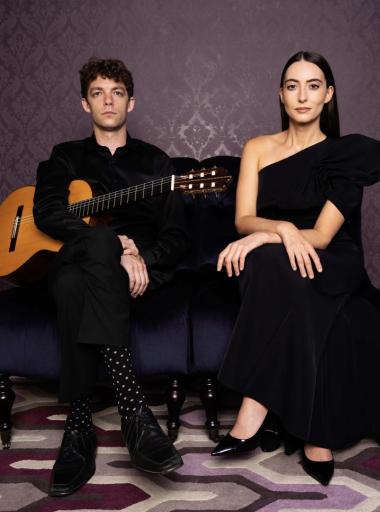 What is an "art song", you may wonder? An art song is a classical piece which has been written specifically for a recital, (often in themed sets), rather than for an opera. The composer will often use the inspiration of poetry, which they set to music. And: they're usually created for voice and piano - not guitar! That is just one of the things which make this recital so special.

The crystalline-voiced soprano Anastasia Malliaras, who holds an MA in vocal performance from USC, performs in styles ranging from Baroque to classical, from opera to show tunes and jazz. She was the winner of the Metropolitan Opera National Council Auditions for in the Los Angeles District in 2018 and is active in the opera world.

Classical Guitarist Aaron Haas holds an MA from UCO Boulder and a PhD in from USC, as well as multiple fellowships in classical guitar from Italian conservatories, in addition to numerous prestigious prizes and awards.

For this concert, they will be performing art songs by Schubert (Wintereisse selections), Ravel,  Castelnuovo-Tedesco, and de Falla. Truly a rare and special treat!