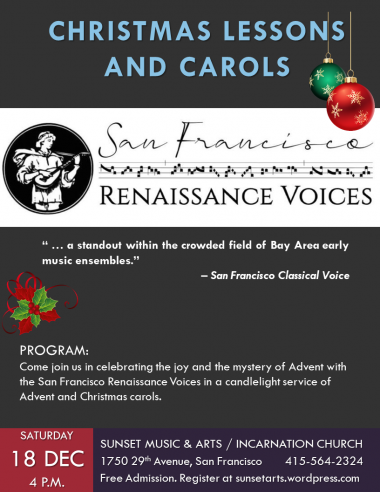 Come join us in celebrating the joy and the mystery of Advent with the San Francisco Renaissance Voices and organist, Don Scott Carpenter, in a candlelight service of Advent and Christmas carols. You will have lots of opportunity to sing and enjoy both familiar and not so familiar carols. This is a fun event for the entire family. A free reception follows the service.

San Francisco Renaissance Voices made their debut in 2004 with a “standing room only” performance of Victoria’s Requiem and quickly became a favorite of San Francisco Bay Area Early Music audiences.

SFRV has consistently earned praise for their “gossamer sound … a sound something akin to spiritual levitation” as well as recognition for their imaginative programming and christened the Bay Area’s “hipper than thou” Early Music ensemble by San Francisco Classical Voice and in 2010 SFWeekly chose SFRV as the “Best Classical Music” for their Best of San Francisco edition. SFRV is the San Francisco Bay Area’s professional mixed-voice ensemble dedicated to performing and exploring the a cappella choral music of the Renaissance particularly lesser-known and rarely-performed works, as well as exploring music from this period outside of the traditional European canon.

SFRV’s Opera Early & Ancient San Francisco mini-series seeks to present to audiences operatic and related works from the Medieval through Baroque periods and has included such works as the “technicolor” production of Hildegard von Bingen’s Ordo Virtutum (“Hildegard’s little-performed musical mantra rang out anew” – Los Angeles Times) and the west coast premiere of William Boyce’s Solomon (“The performance was often exciting and even eye-opening … a performance other groups struggle to achieve on record” – San Francisco Classical Voice).