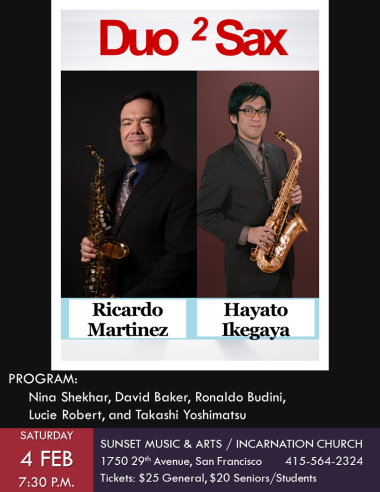 In accordance with health and safety guidelines from the Episcopal Diocese of California and City and County of San Francisco, a face covering is required for all concerts at Incarnation Episcopal church and must be worn at all times. Face masks must completely cover nose and mouth and have ear loops or similar to hold in place. Gaiters and bandanas are not acceptable. Please click here for full details.

Ricardo Martinez, saxphonist
Ricardo Martinez is Assistant Professor of Practice in Saxophone at Conservatory of Music at University of the Pacific. He was selected as Grand Prize Winner of the 9th Plowman Chamber Music Competition and First Prize Winner in the 2017 Chicago Woodwind Ensemble Competition and has played concerts internationally in France, Scotland, and Japan. Martinez has been a featured soloist with the Mission Chamber Orchestra of San José, Stanford Summer Symphony, University of the Pacific Symphony Orchestra, Indiana University Guitar Ensemble, and the Conservatoire à Rayonnement Régional de Cergy-Pontoise Wind Ensemble. In addition, he has performed with Classical Tahoe, California Symphony, Evansville Philharmonic, Bloomington Symphony Orchestra, and has recorded at Skywalker Ranch in Marin County.

Martinez began his saxophone studies in the Bay Area under David Henderson of Stanford University and William Trimble, and earned degrees at the University of Minnesota, studying with saxophone virtuoso Eugene Rousseau, and in France at the Conservatoire à Rayonnement Régional de Cergy-Pontoise, where he studied with Jean-Yves Fourmeau, receiving the Médaille d’Or in saxophone and graduating with honors in chamber music. Martinez later completed graduate work at Indiana University Jacobs School of Music under the guidance of Otis Murphy and studied with the esteemed Japanese saxophonist Nobuya Sugawa at the Hamamatsu International Wind Academy and Festival. As an educator, Martinez has served as Associate Instructor in saxophone at Indiana University and been invited to teach and perform at the Indiana University Summer Saxophone Academy, Stanford University, and CSU (California State University) Summer Arts. He serves as a clinician in Northern California and actively adjudicates solo and ensemble festivals with CMEA (California Music Educators Association) Bay Section. Martinez is an endorsing artist for Legere Reeds and BG France.

Hayato Ikegaya, saxophonist and pianist
Born in Fujieda, Shizuoka Prefecture in 1985, Hayato Ikegaya is a graduate of Shizuoka University. He began attending Yamaha music classes at age 5, where he studied piano performance, music nomenclature, and other elements of music theory and composition, and later took up the saxophone at age 12.

Ikegaya has built an impressive record as a performing saxophonist. He participated in the 16th Hamamatsu International Wind Instrument Academy and Festival seminar and was honored for excellent performance at the Premium Concert highlighting that event. In addition to the Eighth Virtuoso Concert, he has also performed at the New Faces Concert (Japan Saxophone Association).

To date, Ikegaya has studied saxophone under Shintaro Yabe and Atsuyasu Kitayama and piano under Noriko Sugiyama and Mariko Nemoto. He has participated in saxophone master classes and lessons given by Hiroshi Hara, Yasuto Tanaka, Jean-Yves Fourmeau, Nobuya Sugawa, Otis Murphy, Claude Delangle, and Fabrice Morietti and in piano master classes and lessons given by
Mitsutaka Shiraishi. Currently, Ikegaya is active as a performer and instructor on saxophone, a piano accompanist, and composer and arranger.