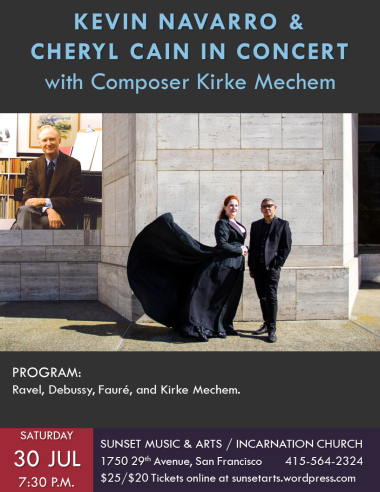 For more information or to buy tickets visit https://sunsetarts.wordpress.com

Program – Music of the 20th century

Kevin Navarro, classical pianist and vocal accompanist is a native of Seattle, Washington and has resided in San Francisco for the past nine years. Kevin earned his Bachelor’s of Music in Piano Performance from Pacific Lutheran University School of Music, where he studied under Dr. Calvin Knapp of the Julliard School, Dr. Richard Nance, Director of Choral Activities and Mira Frohnmayer, Chair of Vocal Studies at PLU School of Music. During his tenure at PLU, Kevin served as the choral accompanist for both University Chorale, and internationally renowned Choir of the West. Kevin was very active in musical theater and opera productions in the Seattle/Tacoma region, and has served as a principle/stage accompanist for PLU Opera Workshop, Tacoma Opera, Seattle Opera and the Tacoma Musical Playhouse including productions such as Madame Butterfly, Marriage of Figaro, Magic Flute, and West Side Story. In December of 2020, Kevin placed 2nd at the San Francisco Semi-Finals of the Music International Grand Prix Competition.

Kevin currently resides in San Francisco, and maintains a busy performance schedule while also maintaining professional accompanist positions with the San Francisco Gay Men’s Chorus, and San Francisco Girls Chorus. After serving as accompanist on piano and organ at St. Ignatius Parish Kevin accepted the Director of Music Ministry position at First Congregational Church of San Rafael in July of 2021. In September of 2021, Kevin will enroll at San Francisco State University where he will study with Dr. Victoria Neve and pursue his Master of Music Degree in Piano Performance.

Kirke Mechem is a prolific composer with a catalogue of over 250 titles. Born and raised in Kansas and educated at Stanford and Harvard Universities, he conducted and taught at Stanford, and served as composer-in-residence for several years at the University of San Francisco. He lived three years in Vienna where he came to the attention of Josef Krips, who later championed the composer’s symphonies as conductor of the San Francisco Symphony. Mechem was guest of honor at the 1990 Tchaikovsky Competition in Moscow and was invited back for an all-Mechem symphonic concert by the USSR Radio-Television Orchestra in 1991.

He has been honored and recognized for his contributions from the United Nations; the National Endowment for the Arts; the American Choral Directors Association; the Music Educators National Conference, and was presented with a lifetime achievement award from the National Opera Association. In 2012 the University of Kansas awarded him its first honorary degree of Doctor of Arts.

Mechem’s compositions cover almost every genre, but vocal music is the core of his work. His three-act opera, Tartuffe, has been performed over 400 times in six countries. His extensive choral works have garnered him the title of “dean of American choral composers.” The premiere of Mechem’s dramatic opera based on American abolitionist John Brown was commissioned to celebrate Lyric Opera Kansas City’s 50th anniversary. Songs of the Slave — a suite for bass-baritone, soprano, chorus and orchestra from John Brown — has been performed over 100 times. His comic opera, The Rivals (an American update of Sheridan’s classic play), was premiered in 2011 by Skylight Opera in Milwaukee. Mechem has recently completed an opera based on Jane Austen’s Pride and Prejudice.