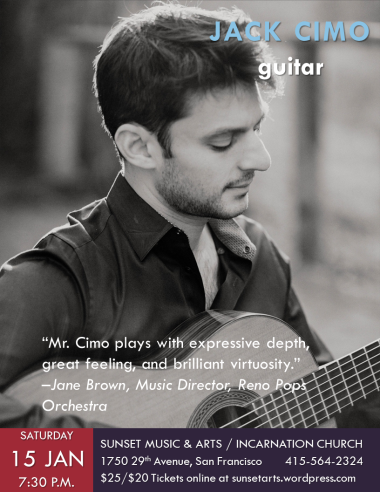 Jack Cimo is a classically-trained Spanish guitarist known for his powerful presence, beautiful tone, and exciting renditions. Having played the guitar since he was a toddler, his devotion to the instrument has directed the course of his life. He has over 20 years of performing experience, and now calls San Luis Obispo, California home.

He has worked with Grammy-award winning musicians such as Steve Suvada, William Kanengiser, and Pepe Romero; and has captivated audiences in Chicago, Los Angeles, Las Vegas, Houston, Costa Rica, and Ireland to name a few. He has been a finalist or prizewinner in various competitions, including winning USC’s Presser Award and taking 3rd in the Sierra Nevada Guitar Festival. He was recently one of two Americans to be invited to the prestigious Joann Falletta International Guitar Concerto Competition in Buffalo, NY.

Jack is passionate about exploring different styles and has a mastery of Spanish classics, romantic Italian music, and festive Central and South American pieces. His wide repertoire includes everything from Baroque and Renaissance music to avant-garde pieces and The Beatles.

Mr. Cimo frequently performs with various chamber music ensembles. He was a member of Chicago’s MODE Ensemble, an innovative group that performed many different programs, including American, Nordic music, and French Baroque. He and cellist Allegra Montanari formed Duo Sogno, playing a rarely heard combination of instruments. They performed the Midwest premiere of Bogdanovic’s Rainforest Canticles in 2015. As a member of the Helios Guitar Quartet, he released in 2013 the first guitar version of J.S. Bach’s Well-Tempered Clavier (Book 1), available on itunes. He is also a frequent collaborator with singers; he debuted Jordan Nelson’s Around the Thrown for guitar and soprano and joined the What’s Next Ensemble for a performance of Michael Gordon’s modern opera Van Gogh, playing electric guitar.

After graduating from USC’s Thornton School of Music with a degree in Classical Guitar Performance, Jack focuses on delighting communities through touring as a soloist, sharing his passion through teaching, and recording. He recently organized and performed in a major benefit concert for the community of Paradise, which was razed by a massive fire in 2018. The concert was held at one of the only surviving buildings, the Paradise Performing Arts Center. He shared the stage with the Los Angeles Guitar Quartet and flamenco guitarist Adam Del Monte, raising funds for those affected. He performed the Concierto de Aranjuez multiple times last season, most recently with the Santa Maria Philharmonic. He was recently in the town of Paracho, Mexico filming a short documentary about this special town, the center of guitar building for much of Latin America, that will be released later this year.

When he’s not playing guitar, Jack can be found snowboarding, hiking, and enjoying dark chocolate. You can find his most recent album Jack Cimo Plays Bach, Bogdanovic, Walton, and Arnold on itunes and all other distribution services or order a physical copy from his website!