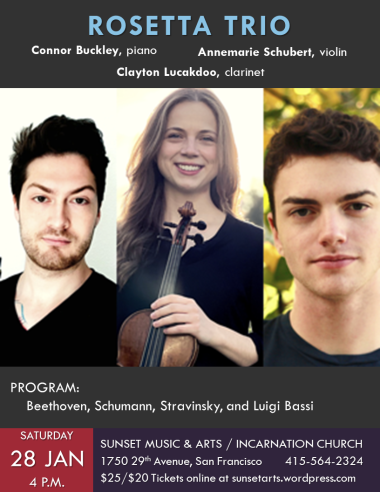 Program: Tales of Love and Betrayal

In accordance with health and safety guidelines from the Episcopal Diocese of California and City and County of San Francisco, a face covering is required for all concerts at Incarnation Episcopal church and must be worn at all times. Face masks must completely cover nose and mouth and have ear loops or similar to hold in place. Gaiters and bandanas are not acceptable. Please click here for full details.

Connor Buckley is currently a graduate student (M.M.) at the San Francisco Conservatory of Musicwhere he studies collaborative piano with Dr. Timothy Bach and opera with Curt Pajer. Prior to this, he graduated from Ithaca College with a B.M. in piano performance. An active performer, Connor has collaborated with various instrumental ensembles, choirs, and soloists in the Central New York and Western Maryland regions. Most recently he was a fellow at SongFest 2022 held in San Francisco and an apprentice repetiteur for multiple productions at the Berlin Opera Academy/OpernFest Berlin. He serves as a pianist for SFCM’s opera department and has been featured on numerous voice department recitals. Previously, he has worked as a music director with Apollo Civic Theatre (Martinsburg, WV), IC Second Stage (Ithaca, NY), and freelance student productions in the Central New York Region. Since 2017, he has spent his summers as an apprentice coach/pianist at opera programs such as Bel Canto in Tuscany (Greve in Chianti, Italy) and the International Performing Arts Institute (Kiefersfelden, Germany). Growing up with a background in Anglican Church Music, he has worked as a conductor and choral scholar for parishes in the Western Maryland Region and Ithaca, NY. Recently he has appeared in masterclasses with esteemed professionals such as Martin Katz, Graham Johnson, Kayo Iwama, Javier Arrebola, and Margaret Brooks.

Clarinetist Clayton Luckadoo is currently a Masters of Music student at SFCM after completing the double degree program at the Oberlin College and Conservatory where he studied Clarinet Performance, Comparative Literature, and German. Though born into a family of non-musicians, he found himself irresistibly drawn to the world of music. Equally comfortable performing contemporary works alongside traditional classical music, his repertoire includes composers such as Bach, Beethoven, Brahms, and Mozart, as well as Adès, Denisov, Ran, and Saariaho. A strong proponent of contemporary music, he is working to increase appreciation of this polarizing genre through a focus on the diversity of its sound worlds as well as its creators. Also keen on cultivating cross-cultural connections, he has performed internationally in Panamá in collaboration with the Associación Nacional de Conciertos de Panamá and in Germany with the Studenten-Sinfonie Orchester Marburg. Dedicated to connecting with members of the community, he has performed for and worked alongside middle school students in Texas, young adults in Panama, and residents of an Ohio nursing home. A student of Jeff Anderle and a former student of Richard Hawkins and Anna Carney, he has also participated in masterclasses with Ricardo Morales, Boris Allakhverdyan, Dan McKelway, and Michele Zukovsky. When not performing, he can be found in a library working and/or exercising his love of words.

German-American violinist Annemarie Schubert began her musical studies at the Musikschule “Johann Sebastian Bach” at the age of 6 in Leipzig, Germany. After moving to the United States in 2006, she continued studying the violin and made her debut at the Lied Center for the Performing Arts at age 12. She appeared as a soloist with the Lincoln Youth Symphony both in the US and abroad as a winner of the Concerto Competition in 2016. Annemarie graduated from the Oberlin College and Conservatory in 2021 and holds dual Bachelor’s degrees in Violin Performance and Neuroscience. She is currently pursuing a Master’s of Music at the San Francisco Conservatory of Music under Prof. Simon James and studies the baroque violin with Prof. Elizabeth Blumenstock and Carla Moore. Annemarie has served as the concertmaster of the Oberlin Orchestra, Oberlin Chamber Orchestra, Oberlin Contemporary Ensemble, and the San Francisco Conservatory Orchestra. Most recently, she performed Bach’s Concerto No. 1 in A Minor with the San Francisco Conservatory Baroque Ensemble as a winner of the Historical Performance Competition. Annemarie served as a Fellow at the Aspen Music Festival and School and is an Academy member in the Lucerne Festival Contemporary Orchestra. Upcoming engagements include a debut with the Berwick Academy in Oregon, a Fellowship at the Haydn Academy at the Smithsonian Institute in Washington, D.C., and a debut with Ars Minerva in San Francisco.