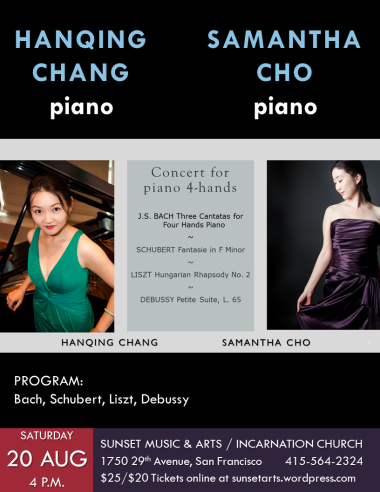 Born in Los Angeles, pianist Samantha Cho is active professionally as a performer and educator.

An avid chamber recitalist, Samantha has performed with members of the San Francisco Symphony, San Francisco Ballet Orchestra, Minnesota Orchestra and Houston Symphony, and she has also performed with Kenwood Symphony as winner of the 19th Annual Master’s Concerto & Aria Competition. Her performances have been broadcast on WFMT, Classical King FM, Arte TV, KTSF 26, UChannelTV 15.5 and NBC Bay Area.

Samantha is currently a music instructor at Pierce College and Southwest College, where she teaches class piano and music appreciation courses. From 2016-2019, she has also held a prior position as pre-college chamber music coach at San Francisco Conservatory of Music.

In 2021, Samantha created a blog Sam Loves Mozart – where she shares her tips and inspirations along her journey as a classical pianist.

Samantha received her Bachelor of Music at Northwestern University, Master of Music at Cleveland Institute of Music, and Doctor of Musical Arts at University of Minnesota. Her childhood teacher, Robert Turner, was renowned as protegee of the Lhevinnes at the Juilliard School. She continued her studies with the following teachers: Paul Schenly, Kathryn Brown, Sylvia Wang, and Alexander Braginsky.

Chinese pianist Hanqing Chang has appeared in concert venues throughout Germany, Hong Kong, Singapore, U.S., and China. At the age of 10, she started performing in public. By 12, she had her first piano recital in Guiyang. She was invited to perform Tchaikovsky Piano Concerto No.1 with the Guiyang Symphony Orchestra in Beijing’s National Centre for Performing Arts. Critics praised Ms. Chang’s performance, the Jin Qian News, “Hanqing Chang’s performance of Tchaikovsky’s First Piano Concerto was bursting with Russian character and sentiment. Together with the orchestra, their musical collaboration produced music that was graceful, youthful, and brilliant. Especially for the soloist, the melody flowed from her delicate but vigorous fingers, displaying her agile technical ability. The audience was immersed in the music’s expressive atmosphere and gave her a thunderous standing ovation.”

​In the same year, she received an offer for a full scholarship from the Yong Siew Toh Conservatory of Music in Singapore. She then pursued a Bachelor’s Degree in Music at the Yong Siew Toh Conservatory of Music of the National University of Singapore, where she studied with Professor Thomas Hecht. Finally, in 2010, with her outstanding academic performance, she got a Graduate Scholarship to pursue her Master’s degree in music at the Peabody Institute of Johns Hopkins University. She studied with Professor Yong Hi Moon.

​In 2012, with her outstanding academic performance, she got an Enlight Foundation Scholarship Award for Scientist and Artist to pursue her Doctor of Music Arts degree at the College-Conservatory of Music. In 2014, while finishing her Doctor of Music Arts degree, Hanqing also pursued an Artist diploma at the same time at the University of Cincinnati, College-Conservatory of Music, where she studied with Professor Awadagin Pratt.

​Hanqing is also passionate about teaching. She has enjoyed ten years of teaching experience working with piano students in various settings both in the United States and in China and Singapore. In addition, she has presented public masterclasses in Shenzhen, Chengdu, Guiyang, Shenyang.