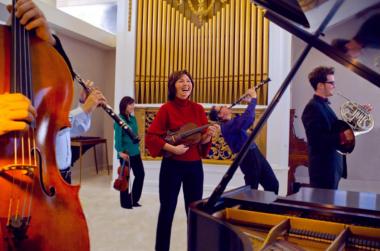 Named Best Concert Series of the East Bay 2021 by Diablo Magazine, the Gold Coast Chamber Players return to the stage on September 18, 2021 with a series of five concerts. Each performance is held at the Don Tatzin Community Hall at the Lafayette Library, 3491 Mt. Diablo Blvd. in Lafayette. Concerts begin at 7:30PM with a pre-concert talk at 7PM. Tickets include an option to watch the performances virtually.

As part of the Bay Area Music Consortium, Gold Coast Chamber Players present Culture, Crisis, and Creativity on Friday, February 25, 2022 at 7:30 PM with the Horszowski Trio. Described as “the most compelling American group to come on the scene” by the New Yorker, the ensemble performs Piano Trios by Smetana, Clarke, and Babajanian.

Purchase single tickets and subscriptions online at www.GCCPmusic.com or by calling (925) 283-3728. Visit gccpmusic.com to find regular updates about concert offerings, to make donations, and to purchase tickets.

Community Hall at the Lafayette Library

Community Hall at the Lafayette Library