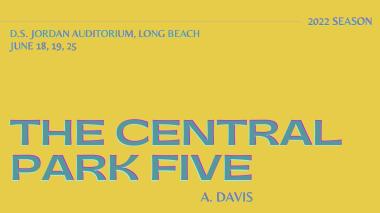 Back by popular demand and increasing societal relevance, THE CENTRAL PARK FIVE will return to Long Beach Opera in a brand new production directed by Juilliard-trained actor / director and star of Apple TV’s “The Morning Show” Desean Terry and conucted by Anthony Parnther. The harrowing account of five teenagers wrongfully convicted, incarcerated and eventually exonerated remains a devastatingly relevant indictment on racial injustices in America. LBO’s 2019 world premiere of the opera brought composer and “national treasure” (Opera News) Anthony Davis additional recognition when the score was selected for the 2020 Pulitzer Prize in Music. “Davis’ supercharged score grippingly conveys the claustrophobia of a racist legal system and society from which there was, for these five innocent boys and their families, no exit.” (Los Angeles Times).

After the critical acclaim of the world premiere and the collective awakening of the Black Lives Matter movement, LBO brings back this important, lauded work in a brand new production, featuring many of the original cast members along with some new additions. Terry’s new production of THE CENTRAL PARK FIVE will reinvigorate the story of five innocent Black teenagers trapped in a Kafkaesque nightmare of the American criminal justice system.