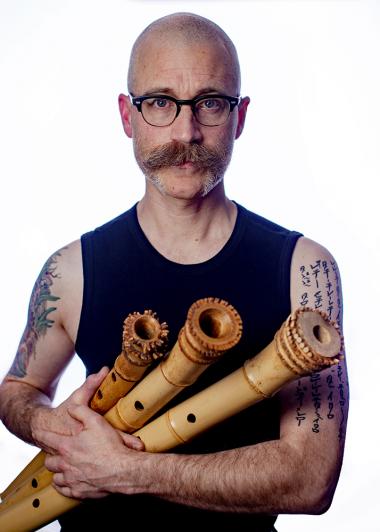 Attracted to specific timbres and a creator with a method characterized by depth, Boots approaches paleo-musicality as a living practitioner rather than as an “-ologist.” An exploratory pioneer in “woodwind primeval,” Boots has been slowly building artistic cultural bridges between the refined abstraction of the concert hall, the creative avalanche of jazz, rock and funk and the rustic, elemental engagement of Earth’s first instrumental musicians: woodwinders.

Nature spirituality and animism have remained at the core of music, patiently waiting to be reintegrated. Music is holy, breath is Life. A Wood Prophet presents a musky and vital antidote to music gone mental and scrubbed sterile. Through 25 years of dedicated style sorcery, Boots returns to the root of music itself. Performing primarily original compositions, this set of forest hymns and bamboo gospel music transports the listener to the ancient days of the Earth, when trees were gods. The sound is of natural life, the conceptual bones are creativity and multiculturalism, the mission is to provide the soundtrack to a profound shift in the human/Nature relationship.

"Shakuhachi" is a vertical, end-blown flute made of root-end bamboo that emerged from Japanese Zen Buddhism back in the old feudal/samurai times. The design is painfully basic—no parts, no mouthpiece, no keys, only 5 finger holes and a blowing edge at the very end of the tube (no whistle design as in recorders, we need a flute-like embouchure)—and the instrument appears as a cured and cleaned up version of exactly what it was when it grew from the ground. To keep the inner bore natural is called "jinashi" and to use a wider, thicker piece of bamboo is called "hocchiku."

San Francisco renegade flutemaker Ken Mujitsu LaCosse created the Taimu in the early 2000's by modifying jinashi, hocchiku versions of shakuhachi so that they had a bigger, "fog-horn glow" to their tone. Taimu means "the big nothing" and it is considered the full-throated, baritone or bass variant of shakuhachi: the Barry White, the redwood tree -- the Bigfoot of all flutes. So rare, it almost didn't exist at all, but thankfully, here we are. Thank you Brother Ken (1960–2019).

Composer/performer Cornelius Boots is a woodwind animist who has forged his own unique path as a professional musician since 1989. Known internationally as a style sorcerer and deeply innovative bass clarinetist and shakuhachi player, Boots has a long history of creating new repertoire by evolving the low-end capabilities of his instruments and artfully weaving deep blues and heavy rock threads into solo and small group compositions. His upcoming book Woodwind Primeval illuminates the granular details of his method and philosophy, and his latest group, The Wood Prophets (previously known as the Heavy Roots Shakuhachi Ensemble), is an apotheosis of the past 25 years of musical and spiritual explorations.

A licensed shakuhachi master and prize-winning composer, he is now integrating the lineages of Watazumido, Eric Dolphy and Son House on jinashi (all-natural) and Taimu (bass) shakuhachi. Boots has generated and released a catalog of new songs and compositions for these large, raw and rare bamboo flutes of Japanese Zen Buddhist origin: mukyoku (27 pieces for Taimu) and Shakuhachi Unleashed (48 virtuosic songs of rock, Zen, blues, metal and more).

First-prize winner of the 2013 International Clarinet Composition Competition, Boots has also received commissions and awards from Chamber Music America, Yerba Buena Center for the Arts, Areon Flutes, International Songwriting Competition and Meet the Composer. Boots has recorded and released 13 albums as a leader (Edmund Welles, Sabbaticus Rex, Cornelius Boots) and played on albums by The Kehoe Nation, Faun Fables, Jorge Liderman and Aaron Novik. In 2016, he had a nature-conversion, sold all of his Western woodwind instruments, and now exclusively plays natural bamboo flutes with no keys, parts or mechanisms.

Kevin’s relationship to music is deeply rooted in his experience as a first-generation American of East Asian heritage. He recognizes and appreciates the central role music plays in helping to build, shape, restore, and heal communities of color.  As a taiko percussionist, Kevin has contributed to the Asian American and Buddhist communities by giving countless workshops, teaching at conferences (including TechnoBuddha and the IntercollegiateTaiko Conference), performing at various festivals (including San Jose Obon, Yerba Buena Gardens Festival, San Francisco Japantown Cherry Blossom Festival, etc.), and piloting UC Berkeley’s first course on taiko as art, as community, and as cultural movement.

Currently a PhD student at UC Berkeley’s School of Public Health, he has a window into the statistical lives of various communities through his work in epidemiology, including how environmental and psychological factors directly impact quality of life and longevity.  Starting clarinet lessons with Boots way back in 2004, his ongoing reed and flute musicianship and polystylism keep him musically challenged while grounding him in the breath practices these instruments require.  For Kevin, shakuhachi and Taimu have constituted an important part of his spiritual practice. However, he is extremely excited to pivot towards performance under the leadership of Cornelius Boots as a member of the Wood Prophets (Heavy Roots Shakuhachi Ensemble) and Assistant Director of the Black Earth Shakuhachi School.