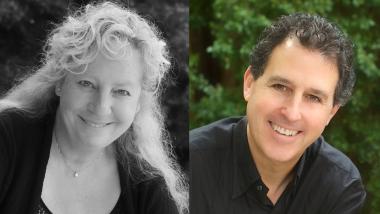 The Ives Collective presents powerful live music experiences through fresh and informed interpretations of established masterworks and underappreciated gems. With core members and Artistic Co-Directors Susan Freier and Stephen Harrison, the Collective wants to share their joy in bringing together old friends and new in a variety of combinations to perform the widest possible spectrum of chamber music.

Icelandic violinist Hrabba Atladottir studied in Berlin, Germany with Professor Axel Gerhardt. After finishing her studies, she worked as a freelancing violinist in Berlin for five years, regularly playing with the Berlin Philharmonic Orchestra, Deutsche Oper, and Deutsche Symphonieorchester. Hrabba also participated in a world tour with the Icelandic pop artist Björk, and a Germany tour with violinist Nigel Kennedy.

In 2004, Hrabba moved to New York, where she played on a regular basis with the Metropolitan Opera, New York City Opera, Orchestra of St. Luke’s and New Jersey Symphony Orchestra among other orchestras.

Since August 2008, Hrabba has been based in Berkeley, California, where she has been performing as a soloist as well as with various ensembles, such as The New Century Chamber Orchestra, The Left Coast Chamber Ensemble, The Empyrean Ensemble, The ECO ensemble and the San Francisco Contemporary Music Players to name a few.

Susan Freier, violin/viola, and co-Artistic Director of the Ives Collective, earned degrees in music and biology from Stanford University as a Ford Scholar and continued her studies at the Eastman School of Music where she co-founded the award-winning Chester String Quartet. The Chester went on to win the Munich, Portsmouth (UK) and Discovery Competitions and were the quartet-in-residence at Indiana University, South Bend.

In 1989 Susan returned to her native Bay Area and joined the Stanford faculty and the Stanford String Quartet. She performs with the San Francisco Contemporary Music Players and has been an artist/faculty member at the Newport Music Festival, Garth Newell, Music in the Mountains, Rocky Ridge Music Center, and the Schlern and Orfeo Music Festivals (Italy). Susan teaches and performs at the Mendocino Music Festival, the SoCal Music Workshop and the Telluride Chamber Music Festival.

Freelance violist Clio Tilton delights in the diversity and excitement in her career. Seeking to share her gifts both through teaching and performing, she can be heard around the Bay Area in a wide range of groups: early music ensembles, symphony orchestras, chamber groups, and rock bands.

Clio performs regularly as a substitute with the San Francisco Symphony, the San Francisco Chamber Orchestra, the San Francisco Contemporary Players, Oakland Symphony, American Bach Soloists, as well as other regional orchestras. Sought after as a chamber musician, Clio has performed with the Friction Quartet, Classical Revolution, and is a founding member of the Chamber Music Society of San Francisco. She has recorded for Time Warner with the Camerata de Lausanne, and has also been heard in recordings with Shajarian, Geographer, and Meklit.

Clio was named for the Greek muse of history and music. She started piano at age six, picked up a viola in fourth grade, and the rest was … history. She completed Oberlin's double degree program in viola performance and comparative literature, writing a senior thesis on the Japanese poet Ishigaki Rin. After earning her master's at Juilliard, she was awarded a Fulbright Fellowship to study orchestral and baroque performance in Switzerland. During her two years studying in Lausanne and Geneva, Clio performed with Swiss ensembles such as l'Orchestre de la Suisse Romande, Sinfonietta de Lausanne, and the Camerata de Lausanne.

Chamber music has always been, and continues to be, a central part of Clio's musical pursuits. She spent three formative summers at the prestigious Kneisel Hall Chamber Music Festival in Blue Hill, Maine during college, and has coached chamber music with the Juilliard String Quartet, Misha Amory of the Brentano Quartet, and Sylvia Rosenberg. During her time at Juilliard she was a member of the award-winning Calla Quartet. In Europe she performed at the THY festival, and most recently has become passionate about finding ways to share chamber music with audiences on a deeply personal level through her work with the Chamber Music Society of San Francisco.

Stephen Harrison, cellist has been on the Stanford University faculty since 1983. A graduate of Oberlin College and Boston University, he has been solo cellist of the San Francisco Contemporary Music Players since 1985.

Born in New York City, Gwendolyn Mok has appeared in many of the world's leading concert halls, including the Barbican, Carnegie Hall, the Kennedy Center, Avery Fisher Hall, Alice Tully Hall, Davies Symphony Hall, and the Hong Kong Performing Arts Center. She is frequently invited to play and record with major international orchestras, such as the London Symphony, the Philharmonia, the Hong Kong Philharmonic Orchestra, the Beijing Philharmonic Orchestra and the Residency Orchestra of the Hague.

Ms. Mok is a recording artist for Nonesuch/Elektra, Musical Heritage Society, Musician Showcase Recordings, Cala Records, and EMI. Her highly acclaimed debut CD with the Philharmonia of Ravel's Piano Concerto in G major on the Cala label was nominated for an Alternative Edison award. A second Cala recording of Saint-Saëns’s Africa—Fantasy for Piano and Orchestra with the London Philharmonic has been equally applauded. Three solo CDs, Ravel Revealed (Ravel’s piano works), Brahms: Late Piano Works, and Legacy, The Spirit of Beethoven were recorded on historic pianos for the Musicians Showcase Recording label. All three CDs received outstanding reviews and are broadcast frequently around the world. Recently two new CDs have been released: Poldowski Art Songs with soprano Angelique Zuluaga and pianist Gwendolyn Mok on the Delos label and EKTA Trilogy, featuring Mok as soloist on EKTA II, a concerto written for her by composer Brent Heisinger.

As a chamber musician, Ms. Mok appears regularly in the San Francisco Symphony Chamber Music Series, as well as in the San Jose Chamber Society and the Sacramento Chamber Society series. She collaborates often with members of the New York Philharmonic and the Philadelphia Orchestra. A popular soloist with the Symphony Silicon Valley, Ms. Mok co-produced and appeared in four sold-out performances of The Gershwin Radio Hour. In 2016 Ms. Mok was named President’s Scholar by San Jose State University, the highest honor given to an outstanding faculty member for their scholarship and research. Mok was also presented with the Artistic Acheievement Award by the College of Humanities & the Arts in 2008.

Ms. Mok began her studies at the Juilliard School of Music, completed her undergraduate work at Yale University, and earned her Masters and Doctorate at the State University of New York at Stony Brook. She is currently Coordinator of Keyboard Studies at San Jose State University and maintains a busy performing and recording schedule.