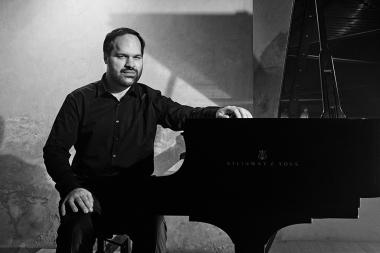 “Jan Bartos is one of my most impressive and exciting young colleagues. In him, virtuosity is coupled with deeply serious musicianship.” – Alfred Brendel

The second concert of the solo recital series features the West Coast Debut of pianist Jan Bartoš in a program of Czech piano masterpieces. A rare opportunity to hear this exquisite and dramatic repertoire in concert, Mr. Bartoš’ recital promises to be a special musical event.

Bartoš has given concerts at prominent venues throughout Europe, in Asia and the USA, including his debut Carnegie Hall. He made his New York debut in 2009 playing Beethoven’s Piano Concerto No. 5 with the Manhattan Philharmonia.

The late-Czech conductor Jiří Bělohlávek was a keen supporter of Jan Bartoš and regularly appeared together in concerts with the Czech Philharmonic Orchestra. Together with the Czech Philharmonic Orchestra, Bartoš recorded Mozart’s Piano Concertos No. 20 in D minor, K 466 and No. 12 in A major, ‘a quattro’, K 414. London’s The Sunday Times wrote that Bartoš’s ‘‘crisp articulation and singing legato are never far from the spirit of the composer’s sunnier comedies.”

Bartoš was the last pupil of the legendary pianist Ivan Moravec. Following his studies in the Czech Republic, with Martin Ballý and Miroslav Langer, he continued to hone his artistry abroad, under the guidance of Alfred Brendel, Leon Fleisher, James Tocco, and Zenon Fishbein. And studied chamber music with Juilliard String Quartet’s Robert Mann and Emerson String Quartet’s Lawrence Dutton. He has a Professional Studies Diploma from the Manhattan School of Music in New York, and a doctorate from the Academy of Performing Arts in Prague. For more information visit JanBartosmusic.com