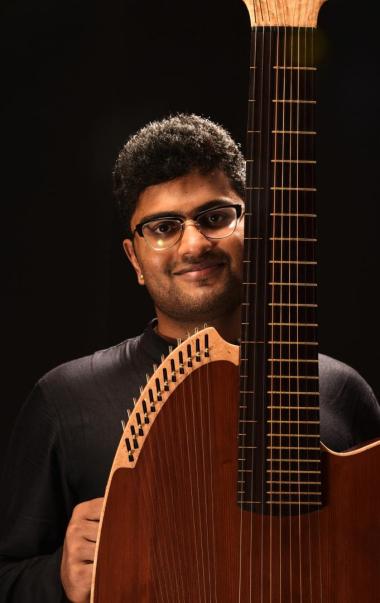 Vishnu R is an award-winning performer, composer, inventor, and patent-holder of the navtar, a unique revolutionary 9-string instrument encompassing fretted, fretless and harp elements that bring together the best of Indian Classical melody & Western harmony. A Fellow of the US Government Bureau of Education & Cultural Affairs, Vishnu has worked with leading stalwarts in the music industry including multiple GRAMMY-winning artists and producers. With performances across India, Europe and the US, he brings to audiences an original, immersive & irresistible blend of high energy & soulful Indian Classical, Jazz and Spanish music.

Vishnu’s versatility and mastery of Indian Classical and Western music has gained him several awards such as Grade 8 Distinction in Western Classical Guitar from the Trinity College of London, ‘WINNER’ of the Beyond Music International project, Karnataka State Government award and Pogo Amazing Musician Award to name a few. As a session artist, he has recorded for several Indian and International projects, films, productions, and albums. Vishnu has been a passionate social reformer, innovator, and educator, and has given lectures and talks on Music, Innovation and Education at industry-leading forums and conferences. For more information, please visit vishnunavtar.com