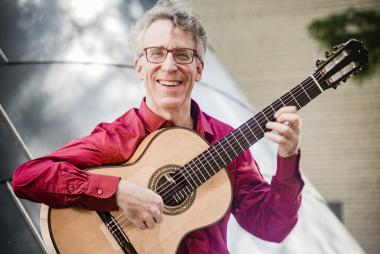 Known worldwide as a charismatic and adventurous performer, Eliot Fisk continues to expertly push the guitar beyond its limitations. “At the top line of our artistic world.” –Andres Segovia

Guitarist Eliot Fisk is known worldwide as a charismatic performer famed for his adventurous and virtuosic repertoire. He is also celebrated for his willingness to take art music into unusual venues (schools, senior centers, and even logging camps and prisons!). After nearly 50 years before the public he remains as his mentor Andres Segovia once wrote, “at the top line of our artistic world.” In the 2017-18 season Fisk continues to break new ground for the guitar with marathon performances of his transcriptions of all 6 Bach solo cello Suites, duo performances with guitar legend Angel Romero and with a new trio formed with virtuoso guitarists Joaquin Clerch and Aniello Desiderio.