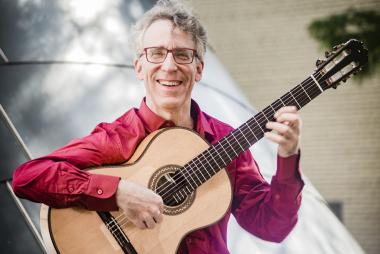 Known worldwide as a charismatic and adventurous performer, Eliot Fisk continues to expertly push the guitar beyond its limitations. “At the top line of our artistic world.” –Andres Segovia

Guitarist Eliot Fisk is known worldwide as a charismatic performer famed for his adventurous and virtuosic repertoire. He is also celebrated for his willingness to take art music into unusual venues (schools, senior centers, and even logging camps and prisons!). After nearly 50 years before the public he remains as his mentor Andres Segovia once wrote, “at the top line of our artistic world.”

In the 2017-18 season Fisk continues to break new ground for the guitar with marathon performances of his transcriptions of all 6 Bach solo cello Suites, duo performances with guitar legend Angel Romero and with a new trio formed with virtuoso guitarists Joaquin Clerch and Aniello Desiderio.

The long awaited release of Robert Beaser’s monumental guitar Concerto (dedicated to Eliot Fisk) on LINN records in 2017 elicited rave reviews online and in print. In the spring of 2017, Eliot Fisk premiered Son Dementes Cuerdas with the famed Arditti String Quartet with performances on two continents culminating in a performance at Wigmore Hall in London in a concert also featuring the Sequenza XI for solo guitar composed for and dedicated to Eliot Fisk by Luciano Berio.

The repertoire of the classical guitar has been transformed through Fisk’s innumerable transcriptions (including works by Bach, Scarlatti, Haydn, Mozart, Paganini, Schubert, Mendelssohn, Granados, Albeniz and many others). In addition, numerous new works have been dedicated to him by composers as varied as Leonardo Balada, Robert Beaser, Luciano Berio, Ralf Gawlick, Nicholas Maw, George Rochberg, Daniel Bernard Roumain and Kurt Schwertsik.

Eliot Fisk was the last direct pupil of Andres Segovia and also studied interpretation with the legendary harpsichordist Ralph Kirkpatrick at Yale University, from which he graduated “summa cum laude” in 1976, and where, directly following his own graduation in 1977, he founded the guitar department at the Yale School of Music. Described by one New York Times headline as a “Fiery Missionary to the Unconverted”, Eliot Fisk is Professor at the Universität Mozarteum in Salzburg, Austria, where he teaches in 5 languages, and in Boston at the New England Conservatory where in 2010 he received the Krasner Award as “Teacher of the Year.” In June 2006, King Juan Carlos of Spain, awarded Eliot the “Cruz de Isabel la Católica” for his service to the cause of Spanish music. Earlier recipients of this honor have included Andres Segovia and Yehudi Menuhin. Eliot Fisk is Founder and Artistic Director of Boston GuitarFest (www.bostonguitarfest.org) an annual cross-disciplinary event cosponsored by the New England Conservatory and Northeastern University and now entering its 13th consecutive year. In 2017 he created and served as Artistic Director of the first ever and immensely successful Salzburg Guitar Fest at the Universität Mozarteum in Salzburg. In summer of 2014 he toured China performing with his wife, classical guitarist, Zaira Meneses, and the couple’s young daughter, pianist, Raquel Fisk.

About the Omni Foundation

The Omni Foundation for the Performing Arts is entering its 40th year of bringing the world’s finest acoustic guitarists to the San Francisco Bay Area. Although the series presents acoustic guitarists of all genres, such as flamenco, jazz and fingerstyle, the primary focus is on the classical guitar. The series is the longest running and most extensive guitar series in the United States and is considered to be one of the foremost guitar series in the world.

Omni presents not only the most celebrated virtuosi of our time but also the emerging artists and stars of tomorrow. The concerts take place in San Francisco’s most prestigious concert venues, both intimate and grand and great efforts are made to insure accessibility to the entire Bay Area community, particularly students.

The Omni Foundation, under the artistic direction of its founder, Richard Patterson, continues to provide a significant position for the classical guitar in the vibrant cultural scene of San Francisco. With the support of serious guitar enthusiasts and the City of San Francisco, Omni presents over 20 exceptional guitarists each season. We hope you will join us and experience the brilliance, beauty and potential of this exquisite instrument, the guitar.

To be announced at the concert