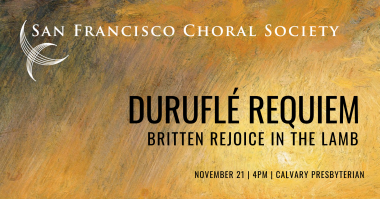 Choral music is back in San Francisco! After over 20 months since the beginning of pandemic, San Francisco Choral Society presents its first concert in front of a live, in-person, audience on Sunday, November 21 at 4pm at Calvary Presbyterian Church.

Headlining the concerts will be Maurice Duruflé's beloved Requiem. At the first performance in 1947, World War II was over but France was in ruins, reduced to a second-rate country—morally, economically, physically, and politically. In the Requiem, Duruflé expressed humanity's profound personal and universal struggle with death while seeking a vision of hope. He described the work this way in his own words: "This requiem is not an ethereal work which sings detached from worldly anxiety. It reflects, in the unchangeable form of the Christian prayer, the anguish of man facing the mystery of his last ending. It is often dramatic, or filled with resignation, or hope, or terror, like the same words of the scripture used in the liturgy. It tries to translate the human feeling in the face of our terrifying, inexplicable, or consoling destiny."

Benjamin Britten composed Rejoice in the Lamb in 1943, basing the work on the poem "Jubilate Agno" by Christopher Smart. The poem, written while Smart was in an asylum, depicts joyous, delightfully idiosyncratic praise and worship of God by all created beings and things, each in its own way.