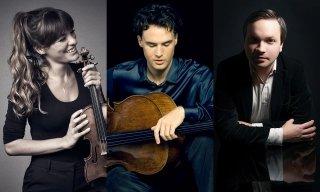 Sought-after soloists on their own, this "super-trio" has always devoted time to performing together since they were students in London. The result is an uncanny performance precision and warm camaraderie on stage. The London Telegraph enthused, "If any piano trio could achieve star status, it's surely this one." Nicola Benedetti is one of the most sought-after violinists of her generation. Her ability to captivate audiences with her innate musicianship and spirited presence, coupled with her wide appeal as a high-profile advocate for classical music, has made her one of the most influential classical artists of today. Described by the New York Times as "a musician of great technical prowess, intellectual curiosity and expressive depth", cellist Leonard Elschenbroich has performed as a soloist with the world's leading orchestras. Kiev-born pianist Alexei Grynyuk displayed tremendous interest in music from his early childhood and started performing at the age of six. As a thirteen-year-old he was already appearing with Ukrainian orchestras playing Chopin and Mozart piano concertos as well as winning international prizes including the first prize at the very last All-Soviet-Union piano competition in Moscow named after Sergei Diaghilev.
Date:
Wed, March 10, 2021 - 7:30pm
Venue:
Herbst Theatre
Organization:
San Francisco Performances
Genres:
Chamber Music
Region:
East Bay
City: San Francisco
Price Range:
$45/$55/$70
Email:
[email protected]
Phone:
415-392-2545
Buy Tickets