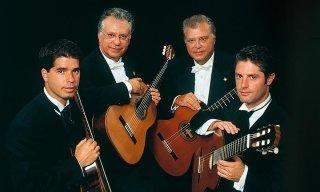 Celin, Pepe, Celino and Lito Romero-members of the "Royal Family of the Guitar" celebrate their 60th anniversary tour. If you've heard and loved the guitar in your lifetime, chances are you have the prolific and peripatetic Romeros to thank for its enduring popularity. Their program features Spanish songs with versatile vocalist Isabel Leonard. The career of The Romeros is unmistakably a milestone of twentieth century music and the Romeros encompass three generations of concert artists. To have so many virtuosi of the same instrument in one family is unique in the music world, and in the realm of the classical guitar it is absolutely without precedent. Since the Romero family came to the United States in 1957, they have consistently dazzled audiences and have inspired enthusiastic praise from critics coast to coast. The Romeros have given thousands of concerts all over the world; today, they continue to produce music which is extraordinary. Whether performing as a quartet, duo or as soloists in recital and with symphony orchestra, the Romeros prevail as champions in the realm of classical guitar. Multiple Grammy Award-winning Isabel Leonard continues to thrill audiences both in the opera house and on the concert stage. In repertoire that spans from Vivaldi to Mozart to Nico Muhly, she has graced the stages of the Vienna State Opera, Paris Opera, Salzburg Festival, Bavarian State Opera, Carnegie Hall, Glyndebourne Festival, Teatro Comunale di Bologna, Aix-en-Provence Festival, Metropolitan Opera, Lyric Opera of Chicago, San Francisco Opera, Los Angeles Opera as Rosina in Il barbiere di Siviglia, Angelina in La Cenerentola, Cherubino in Le nozze di Figaro, Dorabella in Cosi fan tutte, Charlotte in Werther, Blanche de la Force in Dialogues des Carmelites, Costanza in Griselda, the title roles in La Perichole and Der Rosenkavalier, as well as Sesto in both Mozart's La clemenza di Tito and Handel's Giulio Cesare.