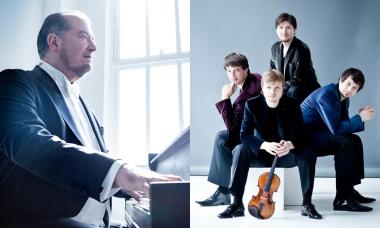 Since his triumph as winner of the 1970 Chopin International Piano Competition, pianist Garrick Ohlsson has established himself worldwide as a musician of magisterial interpretive and technical prowess. Although long regarded as one of the world’s leading exponents of the music of Frédéric Chopin, Mr. Ohlsson commands an enormous repertoire, which ranges over the entire piano literature. Mr. Ohlsson has come to be noted for his masterly performances of the works of Mozart, Beethoven, and Schubert, as well as the Romantic repertoire. To date he has at his command more than 80 concertos, ranging from Haydn and Mozart to works of the 21st century, many commissioned for him.

Winner of first prize and several other awards at the International Music Competition of the ARD in 2008, Apollon Musagète Quartet has rapidly become an established feature of the European musical scene, captivating public and press alike. The quartet studied with Johannes Meissl at the European Chamber Music Academy and was inspired by the musicians of the Alban Berg Quartet at the University of Music and Performing Arts Vienna. The quartet was nominated ECHO Rising Stars 2010, followed by highly successful performances at prestigious European venues. It was also named BBC New Generation Artist in 2012, leading to extensive touring in the UK and a number of recordings for the BBC. In 2014 the musicians received the Borletti-Buitoni Trust Award.