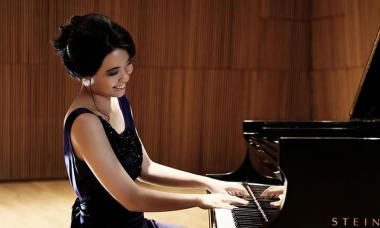 Blessed with "poetic and sensitive pianism" (Washington Post) and a "wondrous sense of color" (San Francisco Classical Voice), Grammy-nominated pianist Joyce Yang captivates audiences with her virtuosity, lyricism, and interpretive sensitivity. In solo recital, Yang's innovative programs have been praised as "extraordinary" and "kaleidoscopic" (Los Angeles Times). She makes her solo SFP debut in this concert, having already performed on our stage with the Alexander String Quartet.

She first came to international attention in 2005 when she won the silver medal at the 12th Van Cliburn International Piano Competition. In 2006 Yang made her celebrated New York Philharmonic debut alongside Lorin Maazel at Avery Fisher Hall along with the orchestra's tour of Asia, making a triumphant return to her hometown of Seoul, South Korea. Yang's subsequent appearances with the New York Philharmonic have included opening night of the 2008 Leonard Bernstein Festival-an appearance made at the request of Maazel in his final season as music director. The New York Times pronounced her performance in Bernstein's The Age of Anxiety a "knockout."

In the last decade, Yang has blossomed into an "astonishing artist" (Neue Zurcher Zeitung), showcasing her colorful musical personality in solo recitals and collaborations with the world's top orchestras and chamber musicians through more than 1,000 debuts and re-engagements. She received the 2010 Avery Fisher Career Grant and earned her first Grammy nomination (Best Chamber Music/Small Ensemble Performance) for her recording of Franck, Kurtag, Previn & Schumann with violinist Augustin Hadelich ("One can only sit in misty-eyed amazement at their insightful flair and spontaneity." -The Strad).

The program will include: