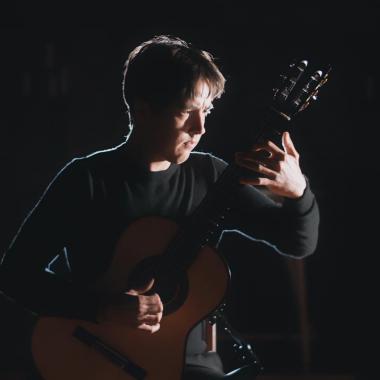 Acclaimed composer Tōru Takemitsu, whose many works were inspired by gardens both real and imagined, visited Muir Woods near the end of his battle with cancer. He then composed his final piece, now considered to be one of the most challenging and beautiful songs ever written for guitar.

Join us in a performance of "In the Woods" by acclaimed guitarist Xavier Jara, captured in the national historic landmark San Francisco Swedenborgian Church and prepared exclusively for this event by director Ian Carr of Goldilocks Studios.

This performance is paired with the streaming of an expanded cut of the documentary "Unruly Mystic: John Muir" by director Michael Conti. Before John Muir, California's wilderness was seen by many as a place meant to be tamed and developed by man. He founded the Sierra Club to preserve rather than destroy the beauty of California's natural landscape, insuring future generations could behold its wonder.

Join us as we explore the giant legacies left by these two men after their experiences with the Woods, and what they can teach us about the divinity of nature through two films: a performance of "In the Woods" by acclaimed guitarist Xavier Jara; and the documentary “The Unruly Mystic: John Muir”, directed by Michael M. Conti. A live Q&A event with Jara and Conti will be available to all ticket holders Sunday May 9 at 7pm. This event is the first in a seven-part series by the SF Swedenborgian Church, "Nature & Spirit" that explores the deeper connection with nature in human imagination, creativity, discovery, and understanding.

American classical guitarist Xavier Jara (1993) is the 1st prize winner of the 2016 Guitar Foundation of America International Concert Artist Competition.  A native of Minnesota, he was a student of Alan Johnston at the MacPhail Center for Music in Minneapolis until 2011 when he moved to Paris, France to study with Judicaël Perroy and completed his Bachelor’s Degree at the Conservatoire National Supérieur de Musique de Paris where he also studied with French guitarist Olivier Chassain, and lute master Eric Bellocq.  He received 1st place in a number of international competitions including the Viseu International Competition (2014), the Boston Guitarfest (2014), the Gargnano, Italy Competition (2015), the Ciudad de Coria Competition (2015), and the Tokyo International Competition (2016).  In 2016, Mr. Jara returned home to the United States to win the prestigious GFA’s Rose Augustine Grand Prize.

During 2017-2018 Xavier performed more than 50 concerts in the United States, Canada, Mexico, Guatemala & Panama, including a concert at Carnegie Hall (April 5, 2018).

In May 2020, Mr. Jara earned his Master’s degree from the San Francisco Conservatory of Music. He continues to perform around the world and maintains a vibrant studio as Adjunct Professor of Guitar at California State University Fullerton (Fullerton, CA).

Mr. Jara has become fascinated by the work and trajectory of the late composer  Toru Takemitsu. “I was inspired,” says Jara “by how Takemitsu involves nature in his music, his graphic scores, and how the music is reminiscent of Japanese landscape painting in its use of space and silence… Takemitsu sees sound and silence as forces of life and death. You’re not just playing notes.”

Michael Conti is a globally-recognized filmmaker. Growing up in Colorado, nature is an important subject in his work. He has thousands of hours of production experience and spent nearly a decade in Hollywood learning the ropes as he honed his craft of filmmaking. He has worked at Paramount Studio, and with Hollywood elite. In business, he has produced and program managed for global leaders, such as Intel, Mattel and more. His latest independent film "The Unruly Mystic: John Muir" premiered in Yosemite National Park, and was screened theatrically over 60 times since 2018.

Toru Takemitsu In the Woods