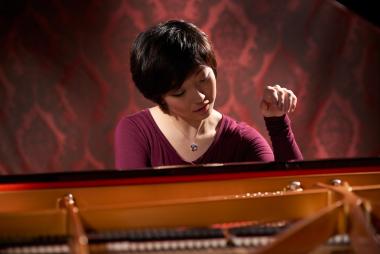 American pianist Claire Huangci will open the Steinway Society – ­The Bay Area’s Home Concert Hall series in September with a recorded performance available from September 17-20, 2021.  Huangci’s appearance will be the start of the 27th consecutive season for the San Jose-based Steinway Society, devoted to promoting excellence in piano performance and music education.

Claire Huangci began her international career at the age of nine, quickly standing out as an expressive interpreter of Chopin—winning first prizes at the Chopin competitions in Darmstadt and Miami in 2009 and 2010. In 2011, she was the youngest participant to receive second prize at the ARD International Music Competition in Munich. Since then, Claire has given solo recitals and performed with international orchestras in prestigious halls in Europe, Asia, and North America.

Claire’s wide range of repertoire spans from Bach and Scarlatti to Bernstein, Gulda, and Corigliano. Her acclaimed CDs include solo performances of Tchaikovsky, Prokofiev, Scarlatti, Chopin, and Rachmaninoff, as well as several performances with orchestras. Her 2020 chamber music debut album with the Trio Machiavelli garnered outstanding reviews for the group’s interpretations of the Ravel trio and Chausson piano quartet. Her Steinway Society program will be dedicated entirely to works of Beethoven.

Single tickets: $25 for one viewer; $35 for two or more attendees

Four-Concert Subscription: $90 for one viewer; $125 for two or more attendees