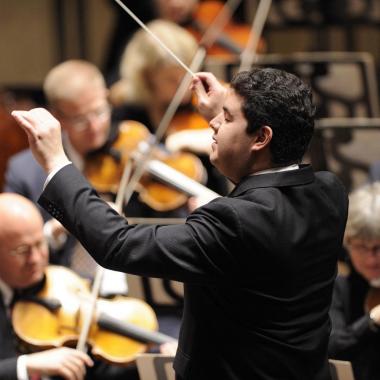 Four composers, whose works defined America in the ‘30s and ‘40s, come together on one grand program: Gershwin, Copland, Bernstein, and Ellington.

Copland’s expansive, optimistic Appalachian Spring became known as “the quintessential American sound.” In fact, all four composers could stake that claim. Gershwin and Bernstein each gave us a brilliant mix of symphonic music, jazz and Broadway. And Duke Ellington’s stunning reflection on Black history from slavery to the Harlem Renaissance is considered one of the greatest examples of long-form jazz. Drawing on the blues, soaring gospel music, work songs, swing, and more, Ellington created an all-American orchestral masterpiece.

One of America’s most prolific composers, Duke Ellington is credited with over a thousand works. He often called them ‘American Music’ rather than jazz. Ellington’s 30-year collaboration with composer-arranger-pianist Billy Strayhorn produced not only countless songs but several long-form compositions – suites more at home in concert halls than in, say, Harlem’s famed Cotton Club.

The greatest of these is Black Brown & Beige.