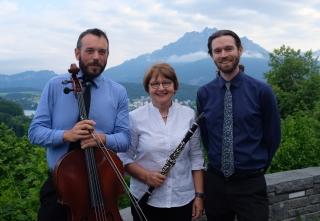 The first trio of its kind, Ludwig van Beethoven's Piano Trio Op. 11 is one of the most interesting examples of the young composers music. Nicknamed the “Gassenhauer” Trio early on, the work is tuneful in the extreme – the word Gassenhauer is a description for a tune that we might call an “earworm”, something that you hear folks whistling in the streets (“Gassen”) long after the concert. Beethoven's choice of putting a clarinet into the classical trio formation, in place of the violin, was undoubtedly to support his vision of creating a piece of music in the style of comic “opera buffa”, which was all the rage in Vienna in the 1790s. The humor and energetic attitude of all three instruments shines through in this early masterpiece.

Although written for a trio with violin, Robert Schumann's final Piano Trio in G Minor, Op. 110, works exceptionally well on the clarinet. A work full of yearning, and a typical example of Schumann's Romantic spirit, this was written during one of Robert's manic episodes, where he churned out over a dozen great works in about a months time!

The program concludes with a work by the Italian composer Nino Rota, that blends the comedy and energy heard and Beethoven with the lyrical romantic tendencies of Schumann in an effortless way. Although Rota was best known for his film scores in the mid-20th century, his collaborations with the legendary Italian filmmaker Fellini, and of course the music from The Godfather movies, you can hear his character clearly in this lovely work of chamber music, the Trio for Clarinet, Cello, and Piano.

The ensemble will share stories of the composers, the context of these works, and offer a brief listening guide to audiences, creating a richer and more engaging listening experience.

Formed in 2012 as an international touring ensemble, the Zurich Beethoven Trio has delighted audiences in Switzerland and the United States with its presentation of classical and contemporary repertoire. Blending the reedy voice of the clarinet with the rich depth of the cello and the wide range of the piano, this trio features Swiss clarinettist Lux Brahn, Swiss-American cellist Charles Akert, and American pianist Ian Scarfe. Their 2020 tours will include 12 concerts across California and 10 more in Switzerland. The trio always takes time during performances to talk to audiences about the music, the composers, and things to listen for in each work, creating a personable and intimate atmosphere.

Lux Brahn, clarinet, studied with Rolf Kubli in Zurich, where she earned her Diploma. She pursued further studies with Yona Ettlinger in Paris and Georg Zeretzke in Hanover. At the Mozarteum in Salzburg, she attended several master classes in clarinet and studied chamber music with Alois Heine and Enrico Mainardi. She makes regular guest appearances on radio and television, as well as in numerous concert halls in France, Belgium, Italy, Germany, Austria, Israel, the USA and Switzerland. She has been a member of the Ensemble de la musique contemporaine in Paris, the Radio Chamber Orchestra of Brussels, the Camerata Zurich, and many other ensembles. Ms. Brahn gives regular concert performances as a soloist with orchestra, as well as with such established chamber ensembles as Zurich Wind Trio, and the Amati String Quartet. Dedicated to supporting new music, Ms. Brahn has had many pieces written for her by contemporary composers.

Charles Akert has been described by Toronto’s Ludwig Van as “a performer with great sensitivity to the music, and an understated virtuosity.” Born in Alaska to Swiss parents, Mr. Akert's career as a cellist began at age 5. Since then he has enjoyed a varied career as soloist, chamber musician and “rock star”. His performances have ranged widely: from Carnegie Hall to NPR’s Tiny Desk Concerts. He has collaborated with numerous artists, from violist Kim Kashkashian to indie bands The Family Crest and Father John Misty. After completing degrees at the University of Northern Colorado and the San Francisco Conservatory of Music, he was awarded residencies at the Banff Centre, the Aspen Music Festival, and Carnegie Mellon University. In 2011, he won first prize at the Plowman Nation Chamber Music competition as a member of the Nexus String Quartet. As a teacher of both cello and chamber music, Mr. Akert has served as guest faculty at the Kinhaven School of Music, at the Blue Lake Festival, and at the Fairbanks Summer Arts Festival. He is a regular guest artist and core member of the Trinity Alps Chamber Music Festival.

Ian Scarfe enjoys a wide-ranging career as an advocate for music. His training led him to the busy world of a piano soloist, collaborative pianist, and chamber musician, however, he has embraced new opportunities as a lecturer on music, an on-stage host, and an entrepreneur designing and organizing concert series and music festivals. Based in San Francisco, California, he performs regularly in venues large and small, and holds a position as pianist at the San Francisco Conservatory of Music. He has performed across the United States, Canada, and Europe, including appearances at the Kennedy Center in Washington D.C., the Fairbanks Summer Arts Festival in Alaska, Festival Rolland in France and Festival Viana in Portugal. He is the founder and director of the Trinity Alps Chamber Music Festival, an organization dedicated to bringing classical music to the communities, schools, and youth of Northern California. In 2004 he studied with Antoinette Van Zabner at the Vienna Hochschule fur Musik. He holds a Master's Degree and an Artist's Certificate from the San Francisco Conservatory of Music, where he studied with Paul Hersh, and a Batchelor's Degree from Willamette University, where he studied with Anita King.