Presented by Wallis Annenberg Center for the Performing Arts 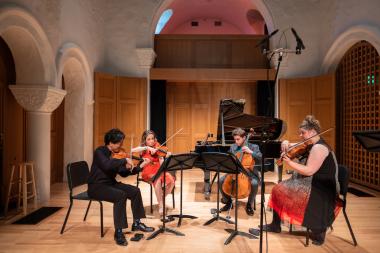 Piazzolla was born in Argentina and grew up in Manhattan’s Lower East Side, where he became a bandoneón virtuoso and immersed himself in jazz and classical music before returning to Argentina to play in tango orchestras and, ultimately, develop his distinctive tango nuevo style, infusing tango with elements of jazz and classical and bringing him international acclaim as a composer.

Salastina, founded in 2010 by violinists Kevin Kuman and Maia Jasper White, who describe chamber music as “the indie rock band of the classical music world,” is comprised of world-class studio musicians who have been featured on a range of iconic film and television scores. Over the past decade, American Public Media’s prestigious Performance Today – the most listened to daily classical music radio program in the country – has featured more than two dozen Salastina performances on its airwaves, reaching millions of people nationwide. The ensemble’s free Happy Hour Tuesday digital presentations featuring live musical performances, spirited conversation and interaction with musicians and other music lovers, has also drawn legions of fans from around the globe.