Tips for Buying a Piano

Consider the needs of the person(s) playing the piano in your house, but you should also think long term. A good upright piano in average household conditions will last 40-50 years before needing a major overhaul, but many have lasted longer. So you want to buy a piano that is a little better than you think you deserve. Because they live in your house, pianos are like furniture so the look of the cabinetry or case is important to most buyers. This will also affect the instrument's price.

A piano has to fit in the space you have for it, and there are many sizes of pianos. Almost all pianos have 88 keys (the smallest sizes have fewer, a couple of models have a few more). The most important size difference is between the grand piano (in which the soundboard, on which the strings are stretched, is laid flat) and the upright piano. An electric keyboard could be considered as well. The grand also comes in two sizes, “baby” and “concert.” There are qualitative differences in sound and action between a grand and an upright, so serious pianists will eventually have to practice and play on a grand piano, but you probably don't want to begin there, as grands are also much more expensive.

Brand new, full uprights are between 50 and 52 inches tall and are about five feet wide. You need about four to five feet of depth (including the player and piano bench). Uprights sell for anywhere from $3,500 to $10,000 and some uprights sound as good as their more expensive baby grand cousins. There are two smaller, less expensive sizes than the full upright piano; the studio piano (45 to 48.5 inches tall) and the console piano (40 to 43 inches tall). Up until World War II, an even smaller size, the spinet, was popular. A good rule of thumb: the larger the piano, the better the sound.

The advantage to buying a new piano is that it has been inspected and tuned and has no hidden history. Most people, though, buy used because of the lower cost. The disadvantage is that used pianos can have many hidden problems—pianos have thousands of parts that wear down. You should never buy a piano you haven't tried out (or had a friend try out) especially a used piano. You can avoid the worst pitfalls of buying a used piano by going to a reputable dealer. If you're in the market for a $100 piano, you should expect to do an overhaul that will cost at least another $200, depending on how beaten up the piano is. If you're buying used, look inside it at the major parts: http://www.pianoworld.com/buypiano3.htm

If you buy a used piano that hasn't been retouched, a technician may be able to improve the action of the keys. You can also ask a technician to clean the instrument, which may include replacing some of the felt on the hammers, which wears with use. You want to make sure that there are no cracks in or major warping of the soundboard before you buy the instrument. If a piano has not been tuned in a long time (more than six or seven years), it may be impossible to return to a completely even tuning. That won't matter for most uses, and it depends on how out of tune the piano is. In general, don't buy an antique if you want to really play it.

Even if you are buying a piano for a beginner or a noodler, don't leave the instrument untuned and with broken keys or dead spots. That's a real turnoff and the instrument will soon be left unused.

Three things to pay attention to

You can and should bargain over the price of a piano (unless you're buying one of those $100 jobs from an estate sale.) It's a lot like buying a car. Comparison shopping is a good idea. 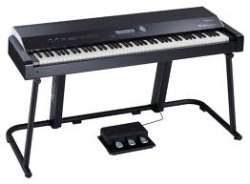 Electronic keyboards have a wide range of uses. They are portable, they can be hooked up, via an industry-standard MIDI (musical instrument digital interface) to a computer for composition, recording, and signal-processing. They can synthesize sounds, and have lots of bells and whistles. Some even come with learning software that includes graded lessons. Prices for keyboards range from $200 to about $3,700 for one that’s top of the line.

What's right for you or your beginning student? Forget about all the extra technology to begin with, because even the simplest models have amazingly cool capabilities. Concentrate on the instrument's size/ complexity and the mechanics of the actual keyboard.

Keyboards, unlike pianos, do not have a standard number of keys. The larger models, of course, have 88 keys, just like the piano, but smaller models have anything from 76 down to 25 keys. Most serious players need all 88 keys, but you can get away with 76, especially with high-quality boards (like the Kurzweil, Yamaha, Roland or Korg). You can still have a high number of synthesized presets and the pricey ones also give you faders and other stuff that are turn-ons for serious electronica fans. Most musicians would say that a 61-key keyboard is good as a second, more portable keyboard, which will take up less space in a setup or music studio. But it's really not the best option as your main instrument, even for beginners.

No matter what keyboard you are considering, test it. It needs to have even key action, and you probably want some “spring” or resistance. That way it's easier to go back and forth between a piano and a keyboard. In electronics terms, you are asking for “weighted keys.” You also need “touch/ velocity sensitivity” so that you have the same volume control on the keyboard as on a piano. Some users prefer “synth action,” however, the un-weighted option, which is better for people who play other instruments but want to use a keyboard for composition or music copying or synthesizing, etc.

Electronic keyboards are much less standardized than their piano cousins, so there are a wide range of technical considerations that could come into play for advanced and professional musicians. But you don't have to go there for a while. Concentrate on getting a keyboard that feels good underneath your hand, and sounds good.

Is Renting a Good Idea vs. Buying?

The key here is whether your child (or whoever is playing) is a beginner, a casual player, just trying the instrument out, or is really into it and is seriously expressing herself/ himself through the instrument. You should rent an instrument for the beginner/ casual player and buy one for the serious player.

There. Don't you wish all of life were that easy?

The question quickly becomes, when do you buy that instrument. Not only is an instrument a major investment, it is also an extension of its owner's personality, and it needs to fit that person. You need to know what kind of music your child really wants to play, and in what situations. You may be insisting on classical lessons, but if the kid really wants to rock out with his garage band, then an electric guitar is more appropriate than an acoustic one. A marching band clarinet is of different quality than a concert hall clarinet. All violins may seem the same, but they don't feel that way to the musician. So when you're buying an instrument, the family piano aside, your child has to be old enough and musically mature enough to give you meaningful input about it. If the question “Do you like this one?” produces a half-hearted “Yeah, I guess,” then the time isn't right to buy. Violins and cellos come in a range of sizes like quarter and half-sized, for the small musician. You most likely don’t want to purchase those until your child is finished growing.

As your child develops more advanced musical skills, they will be held back and frustrated by a poor quality instrument. If it is time to graduate from a student-model, beginner instrument to one with finer features and craftsmanship, it might be time to buy such an ‘upgrade’ for your child.

Some serious instrumentalists, particularly those in school bands, may want to try out a second instrument to their primary one. Woodwind players often play multiple instruments; a clarinetist will also play some saxophone, and maybe the flute as well. In the case of playing numerous instruments, you would probably want to rent the secondary one or borrow it from the school.

There are rental terms that you must be aware of. As with any rental, you bust it, you buy it. Some instruments have seen tremendously hard wear from renters, so make sure you inspect an instrument carefully and have all its nicks and dings recorded before you take possession of it, especially if you're renting-to-own. Read the terms of your contract carefully and ask around for referrals to rental shops with reasonable terms. If you get a bum instrument, return or take it back for repairs as soon as possible.

Rental options begin with month-to-month, which is generally the most recommendable one. If your kid is in band, then a rental agreement for the school year or semester is also good. If you choose rent-to-own, you should make sure that 100 percent of the rental fees are credited toward the purchase price.

Taking Care of a String Instrument

It's hard to be at your best when you don't take care of yourself, and your string instrument is no different. Neglect can lead to long term damage or, at the very least, your instrument not sounding its best.

Along with your instrument, you should have rosin, an extra set of strings, and a cloth to dust your instrument and the shaft of your bow off before they go in the case. Protect your instrument from extreme temperatures — don't leave it in the car — and from humidity outside the 40-60 percent range. A hardware store will sell you a humidity meter for around $15.

Have your instrument restrung every one or two years (cellos and basses can last a little longer). You'll be happier with your sound on new strings. Depending on how often you play, your bow should be rehaired every six to eighteen months. If there is visible gunk on your bow-hair or if you have to rosin up every time you play, it's time. On that note, always try playing before you apply rosin. If your bow hair is in good shape you may be surprised at how infrequently you need it

Taking care of your instrument begins with you, but some jobs are best left for the experts. If you are renting an instrument, the vendor will likely take care of the repair needs of your instrument. If you own your own instrument, any musician or music teacher should be able to recommend at least a couple of trustworthy shops. Find one close enough that you'll be willing to make the drive to keep your instrument healthy.

Keeping your finger on the pulse

Keep an eye on these four things to know whether a trip to the luthier might be necessary:

Tristan Arnold is a conductor in the Santa Rosa Symphony Youth Ensemble program and a music teacher in the San Francisco Unified School District. He holds a bachelor's degree in music education from Northwestern University and is a master's candidate in conducting at San Francisco State University.