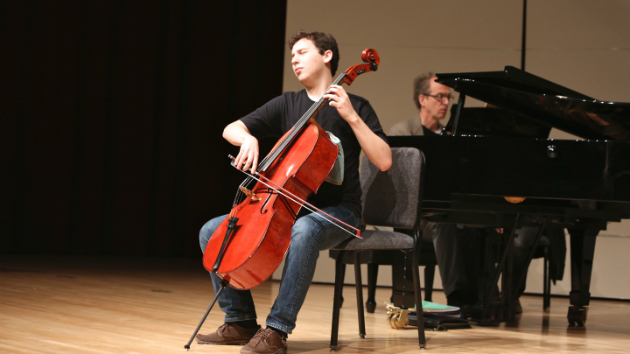 Music competitions often present challenges beyond the strictly musical. For 17-year-old San Francisco-based cellist Oliver Herbert, it was being among the first young string players to take the stage in the semi-final round of the annual Klein Competition, at 10:25 am at San Francisco State University’s Knuth Hall last Saturday. “I had to battle being really tired, I wasn’t used to playing so early,” he admits.

Nevertheless, he placed among three finalists, and then found himself, by luck of the draw, to be the last to perform on the next afternoon. “I was super nervous before going on stage,” says Herbert. And he’s glad to hear that the nervousness was nowhere apparent to this member of the audience over the course of the cellist’s rendition of the fourth and sixth movements of Bach’s Suite No. 3 in C major, the latter two movements of Schumann’s Cello Concerto in A minor, the sweet Allegro from Franck’s Sonata in A major for Cello and Piano, and one of the competition’s commissioned pieces, Ophelia, by Paola Prestini.

Herbert had a hand in choosing both his semifinal and final programs. “The Schumann is very personal ... well-crafted, but not in an obvious way,” he points out. “The Franck is actually a violin piece, but commonly played on the cello, and it gave me a chance to play a true duet with the pianist [Timothy Bach].” Herbert’s love of both the repertoire and the experience of making music was palpable.

The son of freelance violinist and teacher Adrienne Sengpiehl, Herbert grew up studying with Iris Pingel (wife of San Francisco Symphony principal bass Scott Pingel) and Peter Wyrick, before working with Clive Greensmith within the Colburn Academy. He also performed in orchestras at Hoover Middle School and the Ruth Asawa School of the Arts, both in San Francisco. His musical experience has extended to camps and to competitions, though he says of the latter, “I’m not the biggest fan, because music is a subjective art form, but I enter competitions to set a tactile goal for myself, something I have to practice for.”

Herbert was awarded the 2015 first prize, which carries with it cash and local performance opportunities, but he already has the future mapped out. Before enrolling at the Curtis Institute of Music in the fall, Herbert will be a fellow at the Ravinia Music Institute later this month, which he’ll follow up with quality time with his father, David Herbert, former timpanist with the San Francisco Symphony and now principal with the Chicago Symphony. In the longer run, the cellist hopes to collaborate with beginning composers of his generation and to transcribe songs from such sources as Schumann, Ives, Barber, and Britten for his own instrument. “My broad goal is to make classical music more acceptable to the average person,” he says.