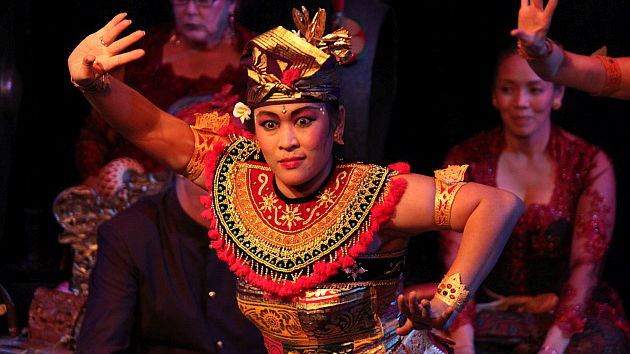 The Lightbulb Ensemble will brighten Gamelan Sekar Jaya's anniversary concerts May 1-2 at the Yerba Buena Center for the Arts.

Already well-known, Lightbulb is a composers' collective, pursuing experimental music, instrument building, and contemporary gamelan, which is a traditional instrumental ensemble of Indonesia that typically includes many bronze percussion instruments. It will bring a multimedia premiere entitled Mikrokosma, commissioned by the Gerbode and Hewlett foundations, to the Sekar Jaya anniversary concert.

The hour-long suite is performed by 12 composer-percussionists on steel metallophones, wooden marimbas, and other instruments that are newly designed, tuned, and constructed based on but also departing from Balinese gamelan.

Mikrokosma originated with Wayne Vitale  –  a founding member and past director of Gamelan Sekar Jaya  –  and Brian Baumbusch, director of the Lightbulb Ensemble as well as designer, tuner, and builder of the instruments. Both composers have been immersed in the music of Bali for many years and in the world of experimental, hybrid music that is thriving in Bali and here in the Bay Area.

Pelangi, says Susilo, "is a highly experimental collaboration with I Made Arnawa. Though we are both unequivocally rooted in tradition, this piece moves far beyond the idioms of jegog's huge bamboo sounds and the techniques of Balinese dance.

"Working with Pak Arnawa's internationally renowned creativity was not always easy because he develops things like a section that has 21 beats per gong cycle! But we sang through it, clapped it out, tweaked small sound elements and in the end the 21 beat cycle is my favorite section of the piece. The movement is perhaps the most outside of the Balinese dance 'box', and yet, in some ways, it is the section that is most Balinese in feeling."

In addition to these new pieces, traditional works will also be performed in various spaces of the YBCA, including the lobby, an outdoor entranceway, and in the YBCA Forum, reflecting the multiple-performance environments of Bali.

There is a complex connection between Balinese movement and the Indonesian gong orchestra: “The dancers' bodies are an extension of the music and instruments. Finding the breath between the two is the really exciting thing about Balinese gamelan and dance together," says Susilo, daughter of noted artists and teachers Hardja Susilo and Judy Mitoma.

Schooled in anthropology and Asian Studies at UC Berkeley and the University of Hawaii, Susilo is also a singer, and one of the founders of Gamelan Çudamani, and has taken a special interest in groundbreaking girls' gamelan programs.