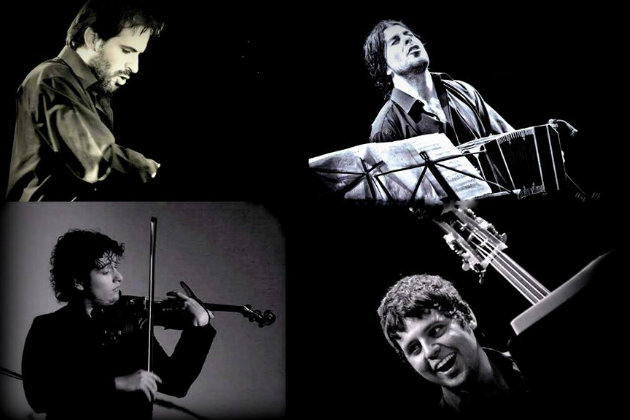 Once more they’re here, performing through Saturday. The Alejandro Ziegler Quartet comes to San Francisco every fall, and has just arrived from Buenos Aires, bringing that most evocative sound of tango, with its roots in both 19th century European Romanticism and in the brackish nature of life along the River Plate of the 1870s.

Alejandro Ziegler is a pianist, composer, and conductor. As a pianist with the Buenos Aires “Orquesta escuela de Tango,” he performed under such great conductors as Emilio Balcarce and Nestor Marconi. His quartet has developed its own style inspired by the great tango orchestras of Carlos Di Sarli, Alfredo De Angelis, Juan D'Arienzo, Osvaldo Pugliese, Anibal Troilo, and Alfredo Gobbi.

Ziegler’s music recasts the idea of the "Orquesta Tipica," with a modern sound, which is partly reflected in his study of classical music.

And what is the nature of that sound?  In a word, unbounded. Ziegler is not tied to any one movement, or any period.  For example, for him, Astor Piazzolla (1921 – 1992) was oriented toward a particular time, the present and the future. Moreover, his music was not for dancers but for listeners, and so his music was played in concert halls.

At the other extreme, the older tango genres — so rich with nostalgia and melancholy — were oriented toward the past; they were a blend of popular music and folk music and spoke directly to the working people of Buenos Aires. “I wouldn’t think of my music as present, past, or future. When I write music, I think of the way all music is connected, how it coexists with all other forms.”

“I am inspired by both movements,” Ziegler told us earlier this week. “I wouldn’t think of my music as present, past, or future. When I write music, I think of the way all music is connected, how it coexists with all other forms.”

Ziegler writes his own music for both the concert hall and festivals.

“If you ask me, ‘what is my message?’ it is simply that the music is not intended to convey a particular idea or emotion.  In the spirit of German Romanticism, tango music is an extension of the idea that music is the purest art because it expresses emotion without words.  And so ‘the message’ is open to interpretation.”

He says that there is also a message in the dancing itself, and particularly in the concept of “the embrace,” adding, “The message is also not explicit; it’s more an abstraction, a philosophy.”

The musicians in the quartet, all in their 20s and 30s, include Ziegler, Ariel Iud (Bandoneon), Sergio Reyes (Violin), and Pablo Lanouguere (Doublebass). This is how they’ve been described: “On stage the communication between the four musicians is expressive, playful, and tight. They flirt with a chamber musical expression without ever leaving the unpredictable spontaneity within popular music and improvisation.”

Performances continue on Friday (San Francisco Community Center at 8 p.m.), along with two on Saturday (San Anselmo at 7 p.m.; San Mateo at 10:45). For details, go to: www.tangorevolution.blogspot.com/.