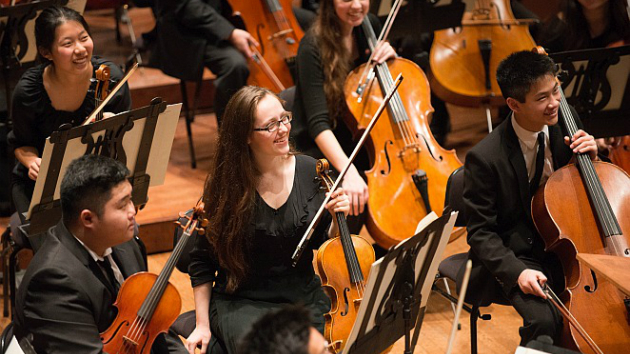 Even after nine triumphant tours abroad over the years, the San Francisco Symphony Youth Orchestra's upcoming venture is mighty impressive. The 18-day tour will take some 100 Bay Area youngsters to perform in major concert halls in Berlin, Amsterdam, Prague, Milan, and elsewhere.

The timely element here is that well before the Youth Orchestra performs in such hallowed venues as Berlin's Philharmonie (July 4 - Adams, Bruch, Mahler) and Amsterdam's Concertgebouw (July 5, same program), home audiences can hear them in two Davies Hall bon voyage concerts on May 17 and June 20.

Soloists on the tour are Urioste, Sergey Khachatryan and Renaud Capuçon alternating in the Bruch Violin Concerto.

The Youth Orchestra consists of musicians ranging in age from 12 to 21, with an average tenure of three to four years. It is the only major regional youth orchestra that does not charge a participation fee for the season; funding is provided by various organizations and individuals. The cost of the tour is approximately $3,700, but a group of 147 individual donors ensures that no student is left behind for lack of finances.

The orchestra's first European tour resulted in the program receiving the highest honor for a youth ensemble, the City of Vienna Prize, at the 15th International Youth and Music Festival. The most recent tour, in 2012, resulted in winning the ASCAP Award for Adventurous Programming of American music on foreign tours; the  performance of Mahler’s Symphony No. 1 at the Berlin Philharmonie was recorded live and released in 2013 on SFSMedia, the orchestra's sixth recording.

Among current activities by SFSYO members, pianist Agata Sorotokin is leading a Music for Life Benefit with NPR’s From the Top and members of SFSYO on May 31 to support the Leukemia and Lymphoma Society.

The June 6 bon voyage program begins with a world premiere, Toccata for Orchestra, by local composer Benjamin Taylor. Also on the program are other works to be played in China: the fourth movement of Tchaikovsky’s Second Symphony, the first and fourth movements of Dvorák’s Symphony No. 8, American Salute by Morton Gould, and Torch Festival by Wang Xilian, composer-in-residence of the Beijing Symphony.