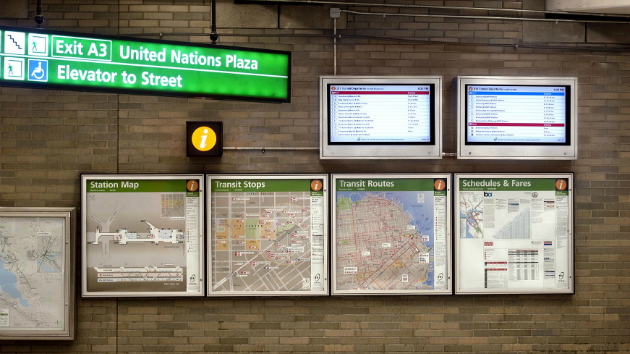 In San Francisco, the BART/Muni station at Civic Center is, depending upon your sensibilities, heart valve or sewer pipe. Or both. For concertgoers Civic Center is the closest link to the War Memorial Veteran’s building, Herbst Theater, Davies Hall, and SFJAZZ, not to mention some smaller venues.

Now BART is considering upgrading the station, which is largely good news. But part of the plan is to close off the underground passageway that runs for a block south from the main station to escalators that rise and fall outside the Burger King at 8th and Market, or else across the street at the Hotel Whitcomb. Coming up at Burger King gives you a straight shot along Grove Street, three long blocks to Davies Hall, past the Library, Graham Auditorium, and City Hall. The alternative is the exit at UN Plaza, and a walk that runs around the back of the Orpheum Theater and past the rear entrance of the library.

We haven’t timed the walk but the difference is negligible, a few minutes either way. But what about safety? That’s not clear. The street culture in this part of town is ubiquitous, and certainly the walk in back of the Orpheum Theater, from Hyde to the UN Plaza escalator is not recommended at night.

On our Facebook page a few patrons have expressed discontent with the BART plan. Marie Bertillion Collins wrote in part, “The impact on older users, i.e. most of the SFO, Symphony, SF Perf. users will be enormous. The added distance, not huge, adds time, which also means those who use connections to BART must take an earlier bus. (for me, it added up to an extra hour a round trip for performances, or meetings when the exit was temporarily closed).”

Christine Lim, the director of artistic administration for S.F. Performances, who posted the item on their Facebook page, commented to SFCV:

We want to lower barriers not raise them. The Burger King entrance has escalators instead of staircases. Late at night, safety is definitely issue, but so are mobility issues. And for people who don’t live in the area, it heightens anxiety not in exact proportion to the added distance. And late at night, when you have to wait 20 minutes between trains, the added two-minute walk would make a difference. For those with mobility issues, that added time is one more negative factor in deciding whether to make a night of a performance in the area.”

We asked BART why the plan is to close the passageway. Jim Allison, a spokesperson, replied that BART has received “thousands” of complaints about derelicts in the passageway and particularly “what they’ve left behind.” The remains of the day by any other name. However, Allison noted that noting has been decided and commentary is still open. Go to http://www.bart.gov/about/planning/civiccenter.