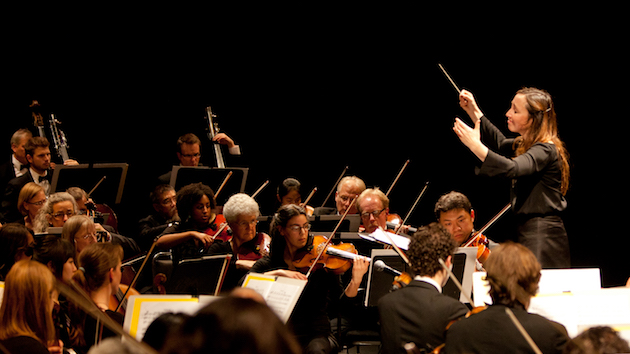 The Berkeley Symphony, the "other symphony" in the inner Bay as it were — and in that way always beguiling — has just announced its program for 2016-17. The season features three newly commissioned premieres in just four mainstage concerts, by Paul Dresher; James MacMillan, and Mason Bates.  And then, the climax of next season, Shostakovich’s Symphony No. 13, “Babi Yar.”

Berkeley Symphony was founded in 1969 by Thomas Rarick, a pro­tégé of the great English maestro Sir Adrian Boult. Unlike many small town symphonies, or ‘second’ symphonies the Berkeley Symphony has established a reputation for brilliance, consistency, and innovation.  The symphony has received ASCAP’s Adventurous Programming Award in 10 of the past 13 seasons. Soloists are major names, such as pianist Shai Wosner (performing Beethoven’s Concerto No. 4) and Philippe Quint (Wolfgang Korngold’s Violin Concerto). 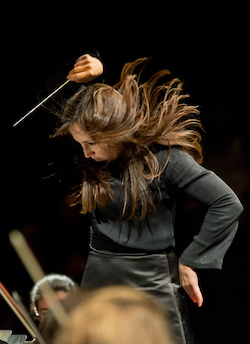 “It starts from the music of our time”, she says referring to this coming season, which opens at Zellerbach Hall in Berkeley in mid October. “Paul Dresher is certainly the first one who comes to mind – he is from Berkeley, and he is an iconic figure in our time. Mason Bates is another composer with local ties, and needs no introduction. I’ve looked forward to collaborating with him for a long time. And working with James MacMillan is something I’ve worked toward for a long time. Commissioning him has been a dream of mine, and I’m so pleased to be working on this co-commissioning project with two top institutions: the BBC Scottish Symphony Orchestra and the Pittsburgh Symphony.”

The schedule concludes on Thursday, May 4 2017 with the evening-long, epic “Babi Yar”, Shostakovich’s Symphony No. 13 in B Flat Minor. Carneiro leads the Orchestra, bass soloist Denis Sedov, and a men’s chorus including alumni from University of California at Berkeley’s Chamber Chorus and Pacific Boychoir Academy, and members of the St. John of San Francisco Russian Orthodox Chorale, led by chorusmaster Marika Kuzma.

“Babi Yar” is the name of a ravine outside Kiev where, in the last two days of September 1941, thousands of Jews, mostly women and children, were ordered to assemble, marched into a forest, stripped of their belongings and clothes, lined up on the bank of the ravine and shot. Succeeding groups were told to lie down on the dead and wait to be shot.  On and on for 36 hours. Layer after layer of bodies, more than 15 yards deep. By one estimate, 33,761 Jews were murdered.  There is some film of the event taken by German soldiers, and there were other massacres at Babi Yar, in which another 100,000 to 150,000 people perished, including Ukrainians, Russian prisoners of war, political dissidents, actors, poets. and gypsies.  A few people survived. Three years later the Germans dug up the ravine and burned the bodies in an effort to cover up the crime. 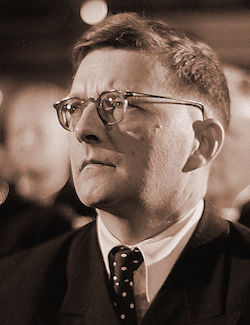 Shostakovich once told an interviewer: “It would be good if Jews could live peacefully and happily in Russia, where they were born. But we must never forget about the dangers of anti-Semitism and keep reminding others of it, because the infection is still alive and who knows if it will ever disappear. That’s why I was overjoyed when I read [Yevgeny] Yevtushenko’s “Babi Yar;” the poem astounded me. It astounded thousands of people. Many had heard about Babi Yar, but it took Yevtushenko’s poem to make them aware of it. They tried to destroy the memory of Babi Yar, first the Germans and then the Ukrainian government. But after Yevtushenko’s poem, it became clear that it would never be forgotten. That is the power of art. People knew about Babi Yar before Yevtushenko’s poem, but they were silent. And when they read the poem, the silence was broken. Art destroys silence.”

The poem, a plea to remember demanded by the spirit of Babi Yar, includes these lines, sung by the chorus.

And I myself, like one long soundless scream
Above the thousands of thousands interred,
I’m every old man executed here,
As I am every child murdered here.

The Berkeley Symphony & Friends has develeoped various community events over the years, including a series of chamber music concerts curated by Executive Director and violinist René Mandel.  Four concerts will be played on Sunday afternoons at the Piedmont Center for the Arts. These concerts are designed to showcase the exceptional artistry of Berkeley Symphony musicians alongside local guest artists in a variety of works for small ensemble. The first concert on Sunday, September 25, 2016 at 5 pm features musicians performing an all-Brahms program. The series is co-presented by Berkeley Symphony and the Piedmont Center for the Arts.