The Catalyst Quartet, with its reputation for “rhythmic energy, polyphonic clarity and tight ensemble-playing,” plays at San Jose State University on April 4 and 5.  The group is just coming off a concert in Puerto Rico, which is the birthplace of quartet founder Karla Donehew Perez. 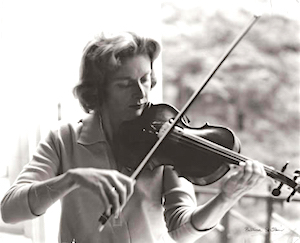 Perez, the daughter of two musicians, and a “music brat” by her own account, moved with her family from Puerto Rico to Berkeley and later Albany. Perez, a violinist, was 12 when she fell into the hands of Anne Crowden at the Crowden School in Berkeley. They spent six years together.

“She really did shape my career,” Perez said the other day, and went on to describe a teacher, then in her late 70s, who was charming, generous, exacting, and sometimes, vaguely reminiscent of the despotic teacher in the 2014 film Whiplash. “If you showed genuine interest and were a hard worker she was there for you, and always supportive; but she had her moments of fury. She always used to freak out in my dress rehearsal — she could be so hard on her students, the expectation was very high — but then my concerts would go really well and she would say; ‘you make me so nervous but you always come through.’”

In many ways, Perez added, “she was like a grandmother to me.”

Perez received her bachelor’s and master’s degrees at the Cleveland Institute of Music and studied with Paul Kantor, David Cerone, and William Preucil. At one time or another she has appeared with nearly every professional symphony ensemble in the Bay Area. 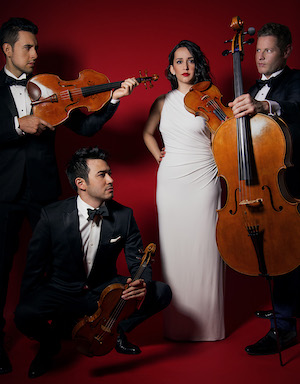 The quartet, a collection of laureates from the Sphinx Competition, includes violinist Suliman Tekalli, who studied at Juilliard, the Cleveland Institute of Music and the Yale School of Music. In 2013, he received the Kaplow Prize from the Cleveland Institute of Music for “uncommon creativity” and that same year, at the Montreal International Music Competition, presented the world premiere of his composition Mephistoccata.

Cellist Karlos Rodriguez, dean of artistic affairs at the Sphinx Performance Academy, is, in addition to his careers as musician, recording artist, and administrator, a strong advocate for “multifaceted musical diversity”, and has developed many innovative collaborations with, among others, the Thomas/Ortiz Dance Company, freefall, and the Mark Morris Dance Group.

Violist Paul Laraia, who took first prize in 2011 at the Sphinx Competition, performs regularly with, among others, the Pittsburgh Symphony and the Atlanta Symphony. He performs solo recitals in this country and abroad and also appears as a member and principal of that most distinguished group, the Sejong Soloists.

Laraia and Perez are engaged to be married in June.

The name of the Catalyst Quartet was inspired by the notion that music, for both musicians and the audience, is inevitably a change agent, in every sense. The quartet’s philosophy is not only to speak through music but also to make connections whenever possible. “To tell a complete story and bring people to a new understanding of what music is all about.”

For Perez that includes a recognition that these are “scary times.” “My mom teaches in an Oakland public school and there are a lot of immigrants who are very frightened under these laws. It’s a constant struggle because a lot of the children are not citizens and many of the families are working people who don’t have the means to fight deportation.”

For more information about venues and tickets for these concerts  at the Catalyst Quartet tour page.