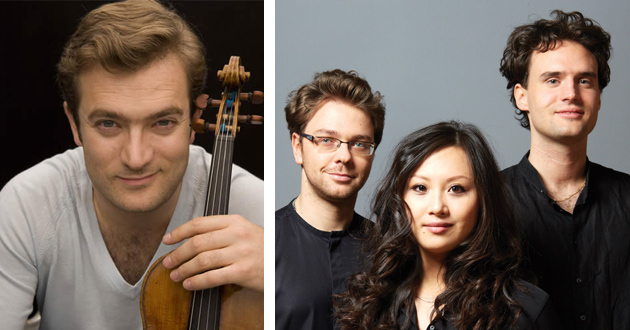 Chamber Music San Francisco may be a one-man-show behind the scenes, but it presents an enlivening array of artists up front in its 12th season. Executive Director Daniel Levenstein produces a season that includes a number of debuts and young artists, including the Casals Quartet (from Spain), the Sitkovetsky Trio (London), and pianist Nikolay Khozyainov.

If you're late to the ball, you might not get tickets for the kickoff event this season, the February 14-16 recital pairing violinist Renaud Capuçon and Khatia Buniatishvili. Fans will not care, but for the record, they plan to play Dvorak's Four Romantic Pieces and sonatas by Grieg and Franck.

Of the top acts CMSF brings to the Bay Area, don't overlook violinist Augustin Hadelich, who made a memorable San Francisco debut a year-and-a-half ago with the S.F. Symphony, playing Beethoven's concerto. On March 22, he plays sonatas by Eugene Ysaye and Leos Janacek as well as Stravinsky's Suite Italienne and the Schumann A-Minor Sonata. Reflecting a love of tango, first heard on his Histoire du Tango album, Hadelich ends with Tango Song and Dance, by Andre Previn.

The visiting quartets, the Pacifica (March 28-30) and Artemis (April 11-13) both figure to be highlights of the season, but we'll be interested to hear the debut of the Casals Quartet (Feb. 28) in a straight-up-the-middle concert of Mozart (C Major “Dissonant” Quartet), Ravel, and Beethoven (Op. 59, No. 1).

And there are a few local artists participating in the season as well: Kay Stern and Dawn Harms, of the S.F. Opera Orchestra, bring back the “Four Seasons of Vivaldi and Piazzolla” concert and the Baroque strings group Archetti led by Carla Moore and John Dornenburg plays two of Bach's Brandenburg Concertos.

Looking back, Levenstein's move, a few years back, to present artists in three different Bay Area locations seems obvious – expand the audience, make it more attractive to artists, and defray more of the cost of bringing in top acts. But it's not an easy model to pull off, especially with good venues at a premium.

Levenstein has managed the difficulties, however. For this year's San Francisco programs, CMSF moves into the newly-renovated Marines Memorial Theatre. With 550 seats and a prime location between Union Square and Nob Hill, new seats, and reasonable acoustics, it's an excellent alternative to the Herbst Theatre, still undergoing its renovation in the War Memorial Performing Arts Center. The outstanding Margaret Lesher Theatre in the Lesher Center in Walnut Creek, and the Schultz Theatre at the Oshman Family Jewish Community Center round out the venues.

For more information on the season: